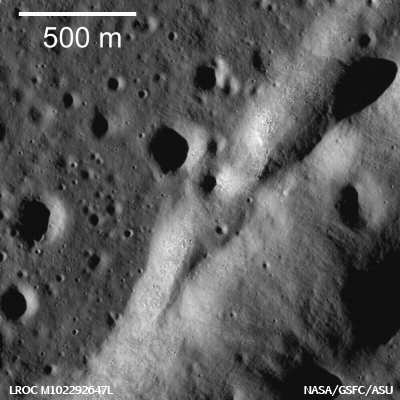 Wrinkle ridges of northwest Mare Imbrium. A northeast-trending wrinkle ridge cuts across the plains of Mare Imbrium. The overall ridge is about 4.5 km wide. The contact between the ridge (right) and the surrounding mare basalt plains (left) runs diagonally up the image (NASA/GSFC/Arizona State University).

For generations amateur astronomers and Moon watchers have watched the sunrise and sunset across the lunar Near Side, patiently waiting for those brief hours when the long shadows of late and early sunshine bring into sharp relief the subtle details otherwise washed out by the glare of mid-day or by dark of long lunar night.

Changing from minute to minute are the wrinkle ridges, revealing deeper clues about the morphology of the Moon's most familiar features in glorious 3D. Most interesting of these features are the rilles, rimae and the ridge systems, especially those within the largest features that are most easily seen with the naked eye on Earth - even Mare Imbrium, that great dividing line in the lunar timeline.

Patience pays off in spades with this latest LRO narrow angle camera release from Arizona State University's LROC News System. A lot will no doubt be written about this latest image by more worthy commentators (with better patience) so I can only add my own additional twist.

Just last night, socked-in with clouds and mist while elsewhere under clear skies those more fortunate may have been rewarded with a spectacular Geminid meteror shower, I turned to Google Earth's Moon map, and happened to "walk" through the digital elevation model within Mare Imbrim.

After months of exploring that data, I have often toured the Apollo corridor where the photometric data matches the solar incidence seen in this latest image from LRO. I've added a picture of what I saw there tagged to this posting below, for some perspective and validation.

Meanwhile, Jeff Plescia at Arizona State's LROC News System had this to say about the picture up above:

"Wrinkle ridges are relatively common on the Moon and are mostly found in the maria; smaller versions are occasionally found in the highlands. They are called "wrinkle" ridges because wrinkling is exactly what happened. Rock (in this case mare basalt) was squeezed from opposite directions, as if it were in a vise, and the rock failed and buckled, or wrinkled, in a direction perpendicular to the squeezing (compression). In detail scientists have found that they are formed by a combination of faulting and folding. Generally there is a broad swell - the ridge - and a narrower feature - the wrinkle. It is the wrinkle that is shown in this frame. In full frame entire structure can be observed. In this area, the overall ridge is about 4.5 km wide and the wrinkle varies from a few hundred meters to just over a km wide. This ridge trends northeast and eventually connects with Montes Recti (a piece of highlands crust protruding through the mare basalts).

"The sun is close to the horizon in this image (about 9 degrees above the horizon), accentuating the subtle topography of the ridge. The image is about 1.7 km across. Compare this Mare Imbrium wrinkle ridge to another example found in Mare Serenitatis. 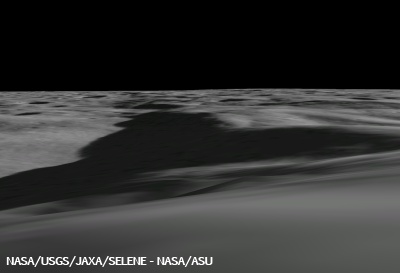 From the northeast rim of familiar Imbrium crater Lambert a tourist of the central basin can get a perspective on a ridge, if not precisely a wrinkle ridge in this case. This trailing feature is almost certainly related to the impact of the crater and not those true wrinkle ridges that outline the slower moving parameter of Imbrium gracing the most easily seen Near Side impact. Even so, Mare Imbrium can appear featureless on first glace, even through heavy lenses. But the patient observer watches the long shadows as they trace out and reveal these undulations, usually narrow though exceedingly long.
Posted by Joel Raupe at 9:02 PM