Columbia on their minds? 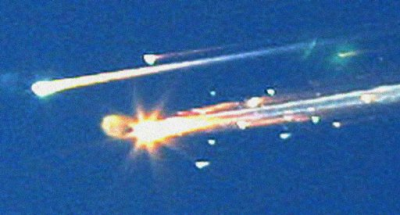 Over north central Texas, February 1, 2003, traveling on the edge of space at Mach 18, the first Space Shuttle Columbia breaks apart during re-entry, killing all seven of her crew and scattering wreckage over thousands of square miles of east Texas, northeast of Houston. Ironically the flawless regularity of the program's final missions following a very restricted return to space, a clear-headed attention to detail and professionalism and (finally) a realistic assessment of what was always an incredible, useful, but inherently dangerous test vehicle has led many outside NASA to again take vehicle safety for granted, the temptation to push the vehicle into its fourth decade of service seems easy. More ironic, the long gap in U.S. manned spaceflight ahead, after the Shuttle's retirement in 2010 (a billion dollar line item, already well underway), is leading to a brain-drain and erosion of institutional memory and experience at every level. More tempting still is to forget how the United States came to be in this position, to allow an institution's mere self-continuity and tradition to become its sole reason-for-being.
In 1971, mostly in denial concerning a sparsely populated gap in U.S. manned space flight after Apollo 17, Congress settled on the promise of a Space Shuttle. The fire that destroyed Apollo 1 and her crew on the pad in 1967 and the breathtaking close call of Apollo 13 three years later made the future safety of manned spaceflight every bit as much of a paramount concern at the time as today, with only five Space Shuttle missions scheduled before its retirement a year from today, even as we approach the fortieth anniversary of Apollo 13 next April.

It would belabor the point to review the Space Shuttle's record, its surprising capabilities, needed more today in no small part because of its 130 missions. And it only seems obvious that the Shuttle never lived up to its primary selling points decades ago, those of convenience, lowered cost and primarily safety, because of those missions since 1981. The Hubble Space Telescope was also a product of that same difficult and clumsy long-term planning so typical of Washington, built to accommodate the two-year election cycle of the U.S. House of Representatives, with its power of the purse.

It's a good idea to look back and to ask how we got here, and to consider America's present dilemma concerning manned spaceflight to be a clear repetition of a similar process that unfolded almost four decades ago, once again in a age-old political dynamic built around short-term planning. In 1971 no one believed a decade would pass before the Space Shuttle flew, or that aside from the surprisingly useful Skylab missions and the Apollo-Soyuz rendezvous in 1975, that first gap in manned spaceflight would last until 1981. The missions underway had NASA's attention, as an institution where lunar travel never lost its novelty.

A similar situation is underway once again, with tight budgets and a host of nested institutions and stockholders prepared to argue over what, in an age where entitlement obligations exceed double the value of all the assets of America and Americans, mere table scraps. A unified vision articulated finally, after the loss of Columbia, is hanging by a thread. And partisan adversaries are squaring off for a bruising fight, each accusing the other of being unrealistic.

Jeff Foust has been following an almost invisible set of congressional hearings, that seemed to suddenly crop up, ostensibly dedicated (once again) to "safety" of one vision of NASA's future over another.

From his writings on his Blog "Space Politics," Jeff offers "A few notes on the human spaceflight hearing," Thursday.

Meanwhile Mark Whittington, writing for the Houston Space News Examiner in "Ares 1 vs.commercial launchers - how to replace the space shuttle?" and points to "Two recent editorials in the journal Space News, one by Congressman Ralph Hall opposing a commercial solution to Earth to low Earth orbit space flight," and "the other by Patti Grace Smith, a former FAA associate administrator" writing for commercial space transportation, and supporting commercial space flight, illustrates development of a new and quite unnecessary controversy in space policy. "

And Keith Cowing for NASA Watch details where prepared statements can be read and the scheduled rebroadcast of the House committee hearings this coming weekend, HERE.
Posted by Joel Raupe at 11:02 PM