"Quickest way to Mars is through the Moon" 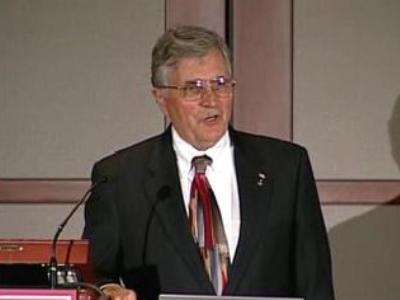 Lot's of work is ahead before even contemplating any logistical path for utilizing lunar volatiles, and other resources, says Apollo 17 veteran Dr. Harrison Schmitt. The former Senator from New Mexico addressed the Austrian Academy of Sciences in Vienna on December 2. [Image Vancouver, 2007]

Xinhua - Discovery of water on the moon might not significantly speed up the establishment of manned stations there, according to someone who has been there, U.S astronaut Harrison H. Schmitt.

Schmitt landed on the moon in 1972 aboard Apollo 17, the last manned mission to touch down on the lunar surface. Being a geologist, he is among an elite group of 12 Americans who are the only people to have walked on the moon to date.

Addressing the Austrian Academy of Sciences here Wednesday about "the origin and history of Moon", he expressed his interest in the recent discovery by U.S. National Aeronautics and Space Administration (NASA) scientists of evidence of water on the moon.

However, he pointed out that that was not enough to promote the establishment of lunar manned station. In his view, the key issue about water on the moon was not its scarcity but rather how to use it.

Schmitt explained there was a lot of hydrogen on the surface of the moon, with which it would be easy to produce water. But there was still no solution to the problem of how to use the frozen water under the very low temperatures that exist there.

Nevertheless, Schmitt believed humankind would finally establish stations on the moon. After all, "the quickest way to Mars is through the Moon," he said.

He said landing on Mars would be the next goal for manned space missions. In order to achieve this goal, people could establish "training camps for young people" on the moon.

During his speech, Schmitt also expressed suspicions about human activities resulting in global warming. In his view, the natural factors, such as solar activity, had a larger impact than the human use of fossil fuels.
Posted by Joel Raupe at 6:21 PM