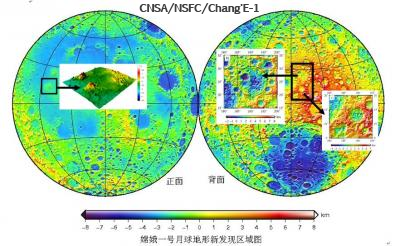 A huge amount of scientific data have been accumulated by the Chang'E-1 lunar orbiter. Using laser altimeter data, Jinsong Ping and Qian Huang et al obtained improved 3D lunar topography, and based on this, they had made new discoveries (such as impact basins and volcanic deposit highlands) of some ancient topographic characteristics on the lunar surface. Chao Chen and Qing Liang et al., found the South Pole-Aitken (SPA) Basin as the biggest mascon on the moon and put forward a fault structure hypothesis for the Apenninus Mountains, which is significant for the study of the origin and evolution of the moon.

The above special-issue papers reporting on the Chang'E selenodesy results were jointly accomplished by experts from the Shanghai Astronomical Observatory (SHAO), the China University of Geosciences (Wuhan) and other institutions. They will appear on Vol. 39 Issue 10 of the "Science in China Series G: Physics, Mechanics & Astronomy" and Vol. 54 Issue 20 of the Chinese Science Bulletin.

Since the 1990s, there has been a new worldwide upsurge of lunar exploration missions. As did the other lunar spacecrafts launched about the same time frame, the Chang'E-1 lunar orbiter focused on selenodesy so that it could remedy the low resolution and poor coverage problems of past data and open the door to recovering lunar evolution by detecting new lunar topography, gravity fields or interior structures. Furthermore, it would prepare for future Chinese spacecraft landing on the surface of the moon.

Lunar topography, chemical composition and thickness all show obvious dichotomy. In-depth investigation into the lunar dichotomy and characteristics of basins, mascons, impact craters and volcanic highlands is the only way to throw light on the history of lunar evolution. Based on the Chang'E-1 lunar DEM model CLTM-s01 published in 2008, researchers from SHAO took a comparative planetary science approach and successfully found some impact basins (i.e. the quasi-impact basin Sternfeld-Lewis and impact basin Fitzgerald-Jackson) and one crater (i.e. the crater Wugang) on the Far Side, and one middle scale volcanic deposit highland (i.e. the 2.8 km highland Yutu) on the Near Side. Moreover, they analyzed and identified some middle scale impact basins and classified them according to their circular characteristics.

Based on the Bouguer gravity anomaly, researchers from the China University of Geosciences confirmed the SPA basin is the biggest mascon on the terrestrial planets in the solar system. Comparing the Apenninus Mountain of the moon with the Himalayas on Earth, they put forward a hypothesis about the possible existence of a big fault structure band, which would possibly change our previous knowledge that there is no motion in the interior of the moon.

Due to certain operational limitations, it is difficult to calibrate the data collected by the Chang'E-1 orbiter. The researchers tried to get around various problems with novel techniques (especially related to the interferometer spectrometer imager), and made the previously inapplicable data useful for estimating the distribution of lunar materials. Besides, Chinese astronomers creatively monitored the critical arcs of the Chang'E-1 trajectory with a VLBI measurement platform.

As forward-looking technologists, they also performed open-loop radiometric tracking of the spacecraft and other unprecedented test experiments, while further participating in same-beam observation of the Japanese SELENE spacecrafts. We believe these pioneering works would make a significant contribution to our country's future deep space exploration.
Posted by Joel Raupe at 12:34 PM