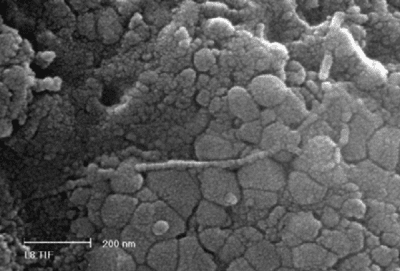 A filament from ALH84001. Filaments and filament fragments of this size are common in modern microbial biofilms and are a product of microbes much larger than the filament. This filament is clearly intergrown with the matrix and is unlikely to be random microbial contamination.

You may remember ALH84001. Thirteen years ago, in what quickly became a media circus, NASA brought an intense budget-time spotlight on this fragment of Mars that had been recovered from the blue ice of Antarctica. Preliminary study and microphotography appeared to show "biomorphs," a fossil trace of microbial life. (NASA's Astrobiology Institute owes its founding to this discovery.) Over time, however, the possibility these traces of primative lifeforms had contaminated after its arrival on Earth could not be eliminated., and direct interest in the meteorite waned. After more than a decade of study investigators are now prepared to say ALH84001 is very likely to be the first evidence of life elsewhere in the Solar System.

New data on martian meteorite 84001 as well as new experimental studies show that thermal or shock decomposition of carbonate, the leading alternative non-biologic explanation for the unusual nanophase magnetite found in this meteorite, cannot explain the chemistry of the actual martian magnetites. This leaves the biogenic explanation as the only remaining viable hypothesis for the origin of these unique magnetites. Additional data from two other martian meteorites show a suite of biomorphs which are nearly identical between meteorites recovered from two widely different terrestrial environments (Egyptian Nile bottomlands and Antarctic ice sheets). This similarity argues Martian meteorites from widely different terrestrial environments contain features similar to each other and to known biogenic features from other terrestrial environments.

We term many of these features biomorphs and use them as pointers for more exhaustive analysis by SEM EDX, TEM, and nanoscale elemental and isotopic analysis by ionmicroprobe (NanoSims Such analysis will include biogenic elements N, C, P, etc., three dimensional mapping, of oxygen isotopes, and determination of deuterium/hydrogen ratios Focussed ion beam sample preparation of selected features is also underway.

Biomorphs found in martian meteorites must also pass our tests for terrestrial contamination in order to be considered genuine evidence for possible microbial life on Mars.

None of the original features supporting our hypothesis for ALH84001 has either been discredited or has been positively ascribed to non-biologic explanations.

The most controversial feature, the presence of distinctive nanophase magnetite (always accepted as a certain biosignature when found in Earth environments), despite repeated attempts, has never been accurately produced in the laboratory in verified reproducible experiments.

Multiple studies by European and US investigators have shown that pure Fe-magnetite cannot be produced by thermal decomposition of mixed composition carbonate: Mixed composition spinels are always the product.

There is no evidence that ALH84001 ever contained any pure Fe-carbonate (siderite); it is impossible to produce the pure Fe-magnetite in this meteorite by the thermal decomposition of any carbonates in the meteorite, Other Martian meteorites from quite different terrestrial environments contain nearly identical biomorphs suggestive of fossilized bacteria from Mars.

The martian biomorphs are intimately associated and interlaced with iddingsite vein fillings which are now universally accepted as martian in origin.

In summary, the original hypothesis that features in ALH84001 may be the result of early microbial life on Mars remains robust and is further strengthened by the presence of abundant biomorphs in other martian meteorites. These biomorphs, while not completely definitive for microbial life, are clearly associated with martian aqueous alteration (iddingsite) and are nearly identical to terrestrial biomorphs known to be formed by microbial activity. New martian data since our original paper have significantly supported the habitability of Mars and the possibility of life there. These data include the presence of an early magnetic dynamo detected by by the discovery of strongly magnetized crustal rocks, the presence of abundant early surface water and recent near-surface water, the presence of early clay minerals and carbonates, and the presence of methane plumes in the atmosphere which may have a biological origin.
Document ID: 20090038980
(10 mg - .pdf)
Posted by Joel Raupe at 2:29 AM

It's interesting, but as a layman, I can't help thinking that those filaments are just drops of lava or whatever. It could be anything at those levels of magnification... right?

Let's hope a sample return mission isn't too far off.

Actually, Anders, Dr. McKay's work pretty much rules out terrestrial origin to this and more distinctive biomorphs you can scan over in the paper, after 13 years working to disprove these as extra-terrestrial he's now left with only the improbable.

Distinctive, sure. It's just that to my eyes, anything on that scale looks distinctive. Hell, if I looked hard enough at those images, I could probably find a feature resembling Jesus' face on a toast. Of course, that's part of the reason my job title isn't "astrobiologist". I'm sure there's much more to his work than mere morphology stuff.

McCay carries a lot of credibility with me, also. He was part of the 1996 team that eventually took a lot of arrows. He spent a big part of the past 13 years trying to "pre-disaster" this to prevent the media circus that followed the announcement and subsequent firestorm that happened back then. His recent announcement is in the form of an excellent lecture. Frankly, though, I had to watch it twice since I kept falling asleep. It was worth watching.

I'm not the first to note the "crickets" that followed his recent announcement, though this is a lot closer to a definitive announcement of the discovery of life "elsewhere."

That silence is pretty remarkable in of itself.