When the LCROSS rocket stage slammed into Cabeus October 9, creating an impact plume of material possibly not seen in sunlight for billions of years, it conclusively proved that water ice exists in the dark recesses of the moon's polar craters.

The LCROSS findings delighted William Feldman, a senior scientist at the Tucson-based Planetary Science Institute. "What got me excited is that everything we said is right, which is a nice feeling."

In 2001, Feldman was the lead author on a paper in the Journal of Geophysical Research entitled Evidence for Water Ice Near the Lunar Poles, which was based on neutron spectrometer data that he and his instrument team gathered during NASA's 1998 Lunar Prospector mission. Feldman was working at Los Alamos National Laboratory at the time, and came to PSI in 2006.

The paper's conclusions were subsequently confirmed by an extensive series of computer simulations conducted by David Lawrence, of the Johns Hopkins University Applied Physics Laboratory, and his co-workers. This work was published in the Journal of Geophysical Research in 2006.

As early as 1961, scientists speculated that water ice could be hidden in the deep recesses of lunar polar craters that never see daylight. These are some of the coldest spots in the solar system, and water from comet and meteorite impacts could freeze and remain for billions of years.

Researchers using radar on the 1994 Clementine spacecraft thought they saw signatures for water in their data, but the results were controversial, especially when others, using Earth-based radar, found similar signatures in measurements taken near the moon's mid-latitude regions, which are exposed to sunlight.

Feldman and his team didn't measure water directly, but their data showed evidence for inordinately large amounts of hydrogen in some craters. Other phenomena, such as the solar wind and outgassing could account for relatively high levels of hydrogen, "but there was a sufficient amount in some of these craters that it would be hard to understand if it came only from the solar wind or through other processes," Feldman said. "So in our paper we didn't call it 'evidence for hydrogen,' but 'evidence for water'."

Not everyone agreed, and some controversy surrounded the paper. But, when NASA went looking for water on the moon with LCROSS, it ultimate targeted Cabeus which Feldman's Lunar Prospector team identified as having the strongest hydrogen signature among surveyed polar craters.

"This is a big, permanently shaded crater," Feldman said. "In fact, you can't even see it from the Earth because it has a rim that hides it. It takes a satellite to see it."

"When we converted the hydrogen signal to the amount of water ice in the regolith, we found that it was only about 1.5 percent by weight," Feldman added. "That's the reason the radar researchers really couldn't see it. There aren't large enough deposits of high-grade water ice to create the signal needed to identify ice with radar."

So it turns out that Feldman and the Lunar Prospector team showed the first experimental evidence for water on the moon, which has now been conclusively confirmed by the LCROSS mission.

"There's a lot of interest in water on the moon right now," Feldman said. "And there is more to be learned. The whole story is not in yet." 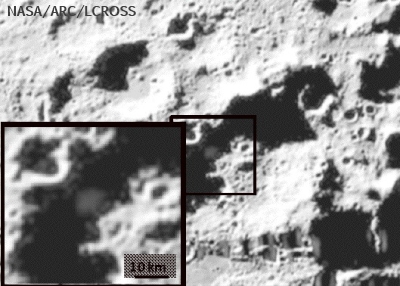 This image, taken by The LCROSS Shepherding and Sensing Satellite's visible-light camera shows the ejecta plume from the LCROSS Centaur stage about 20 seconds after impact [NASA/ARC/LCROSS].
Posted by Joel Raupe at 6:02 PM