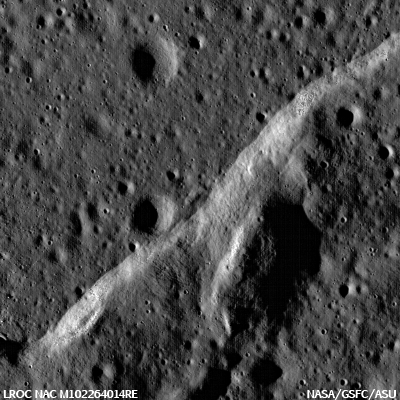 Mare wrinkle ridge outlined by dramatic low Sun shadowing. Common in the lunar mare, wrinkle ridges are found in nearly all of the lunar maria, lunar scientists think that there is a genetic relationship between the basalts they deform and the ridges themselves. Basalt is much denser than the anorthositic crust on which the mare basalts are deposited. As the basalt fills in low areas in the crust, the increased weight causes sagging and the mare deposit is compressed, resulting in tectonic deformation in the form of wrinkle ridges.

Many LROC images show that boulders are often found on the top of ridges and other topographic highs. How did they get there? Were they tossed up and out by nearby impacts? To test this hypothesis look closely for small indents where the boulder hit and for possible source craters nearby. Alternatively they might be fragments of the ridge material broken off during deformation. Or were they on the surface before the ridge was formed? This unnamed ridge is found in the central northern Imbrium basin between Montes Recti and Montes Teneriffe Lat: 47.1°N, Long: 348.2°E.

Explore the whole NAC frame and see if you can determine the origin of the boulders! 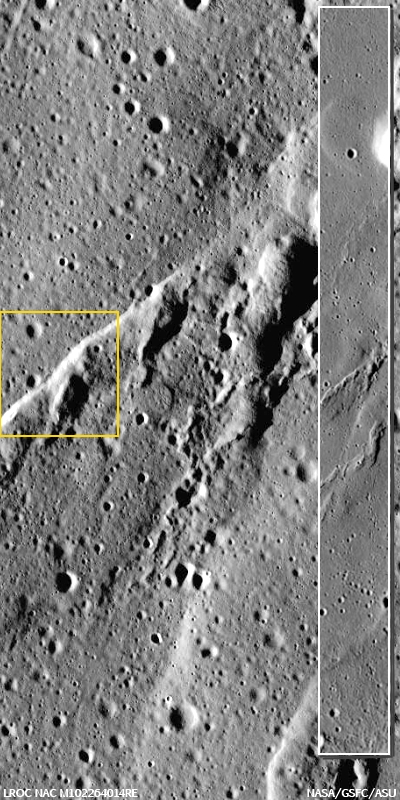 Powers of thousands. The yellow square roughs out the 1200 by 1200 px image reduced above, down to one-third its full-size. The full-size strip of the LRO Narrow Angle Camera image on the right is the right-hand twin of two images swept up at the same time, the 8.5 km-wide size as seen when first accessing the image through the LROC website, here. From there, the whole field of view can be examined in detail unseen since Cernan & Schmitt departed the surface in December 1972.
Posted by Joel Raupe at 11:49 PM