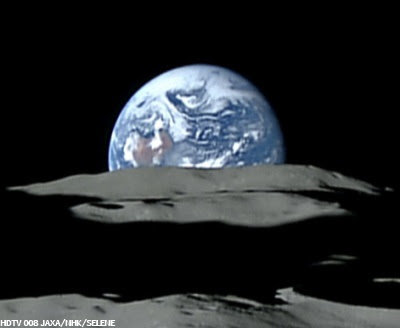 Part of the now-iconic Earthset Series of high-definition television images captured by Japan's Kaguya and released in late 2007. An almost full Earth disappears behind the night-shadowed Near Side. More precisely, our home planet sets behind the legendary Malapert Massif, permanently-darkened Shoemaker and the lunar South Pole on the rim of 10 kilometer-wide Shackleton crater on the lower right. A New Moon, as seen from Earth, is a Full Earth as seen from the Moon [Kaguya HDTV-008 JAXA/NHK/SELENE]
Posted by Joel Raupe at 7:20 PM