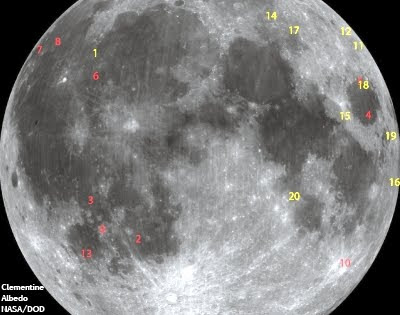 Lunar impacts since Nov. 2005. Numbers 14-16 and 19-20 are Geminids. Number 18 is a probable Geminid. [NASA Meteoroid Environment Group]-Enlarge Image.
As observers pray for clear skies ahead of the 2009 Geminid Meteor Shower, this weekend, hoping with the dark sky afforded by a New Moon to detect as many as 100 or more meteors per hour as our planet passes through the long column of extinct 3200 Phaeton, I've finally hit upon an excuse I needed since the LCROSS impact on October 9 to use an illustration brought up in 2007 showing how frequently the Moon is struck with explosive force.

People have witnessed meteors at every opportunity from time immemorial, of course. Often deliberately, as many will this weekend or, as often happens, sometimes directly in their line of sight the instant after they happen to glance up on a starry night.. While we do have a record of these speedy darts here on Earth, and the stark testimony of crater saturation on the Moon's surface as witness to this regular feature of our place in the Cosmos, the Moon's surface is billions of years old. Reading the history of the inner solar system engraved on the Moon will require sustained exploration, and this is likely to require an extended human presence there. Before we return to the Moon for more lengthy stays, however, we're going to need to finally get a solid idea on the probability of small impacts, their frequency juxtaposed against their magnitude.

First observed (but unclassified) in the 1860's the Geminids have steadily increased each year since, until in our time they are well-known as the year's best. Investigators are keen to know if this year will be it's peak. On encountering the column of their orbit, clustered around the ancient orbit of extinct Near Earth Object 3200 Phaeton, whether a comet or asteroid is not certain, we appear to have gotten closer and closer to the main population of fragments. Presumably we will, at some point, arrive at the depreciating side.

Which brings me, for the second time since 2007, to the results of a sustained observation campaign sponsored by NASA to create a record of impacts on the Moon, which gave rise to the phenomena now known as "the Lunar Geminids."

"On Dec. 14, 2006, we observed at least five Geminid meteors hitting the Moon," reports Bill Cooke of NASA's Meteoroid Environment Office in Huntsville, AL. Each impact caused an explosion ranging in power from 50 to 125 lbs of TNT and a flash of light as bright as a 7th-to-9th magnitude star.

"The explosions occurred while Earth and Moon were passing through a cloud of debris following near-Earth asteroid 3200 Phaethon. This happens every year in mid-December and gives rise to the annual Geminid meteor shower: Streaks of light fly across the sky as rocky chips of Phaethon hit Earth's atmosphere. It's a beautiful display.

"The same chips hit the Moon, of course, but on the Moon there is no atmosphere to intercept them. Instead, they hit the ground. "We saw about one explosion per hour," says Cooke."

Re-read the report HERE.
Posted by Joel Raupe at 3:54 AM