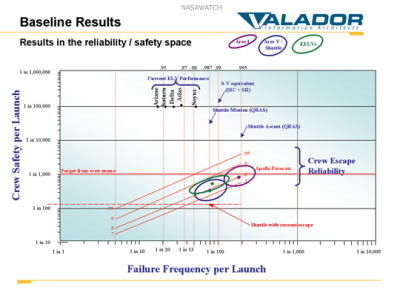 NASAWatch.com, a respected watchdog website, reported on Tuesday night that NASA allegedly withheld information from a White House panel that showed the Ares I rocket did not meet the agency's own safety goals.

According to NASAWatch, the information was contained in a chart prepared by Valador, a company that employs Joe Fragola, a consultant who has authored several studies for NASA. The chart (above) clearly indicates that Ares I falls short of the safety standards that the Constellation Program set for itself.

But the document was apparently withheld from the White House-appointed Review of U.S. Human Spaceflight Plans Committee chaired by former Lockheed Martin CEO Norm Augustine. Instead another chart without the Ares I safety data was presented by Fragola during a public committee hearing in Huntsville, Alabama, last summer.

The website posting has pictures of the charts as well as video and transcripts of the hearing.

Read the post HERE.
Posted by Joel Raupe at 2:10 AM