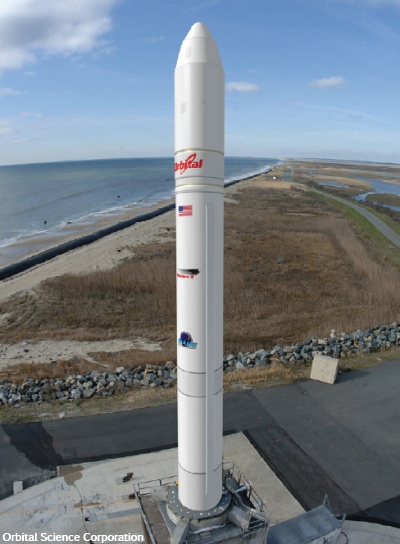 The solid-fuel CASTOR 30 motor, supplied to by ATK Space Systems was test fired for around 150 seconds, producing 72,000 lbs. of max thrust. To accurately test performance the static fire test was conducted in a vacuum chamber designed to simulate conditions at over 30 kilometers altitude.

"We are very pleased with the results. The Castor 30 motor performed according to the specifications built into the design of the Taurus II rocket," said Brent Collins, Orbital's Taurus II Program Manager. "The ground test of the Castor 30 motor is the first major event in the testing phase of the Taurus II development program, having completed the engineering design and procurement work over the past year and a half."

"In addition to the second stage testing, we will soon begin the testing process for the rocket's liquid fuel first stage at NASA's Stennis Space Center in Mississippi."
Posted by Joel Raupe at 6:51 PM