Greetings from the Moon's North Pole 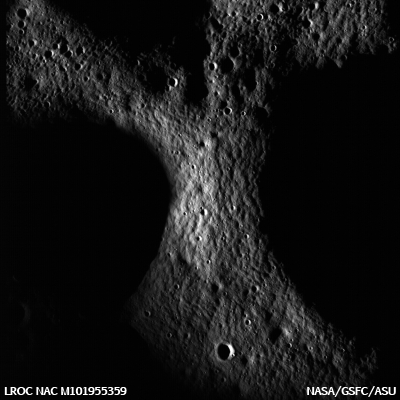 Junction between the rims of three craters on the floor of Peary crater near the lunar north pole is evident in this NAC image (M101955359L). Note the mottled texture of the regolith. Peary is a key exploration site for future astronauts due its proximity to potential resources. Image width is 2.68 km [NASA/GSFC/Arizona State University].

One day in the not-too-distant future, lunar explorers may spend their winter holidays at the lunar North Pole. Peary, an irregularly-shaped impact crater centered at 88.5°N, 30°E, could be the place to do just that. Adjacent to the lunar north pole, Peary has areas along its crater floor cast in permanent shadow, but it also has areas along its rim that may be permanently illuminated by the Sun. The proximity to the north pole, possible areas of permanent shadow and light, plus the potential for in-situ resources make Peary crater a challenging and enticing location for future human and robotic exploration. Peary crater is one of 50 specific sites being explored by lunar geologists using LROC images for NASA's Constellation Program. 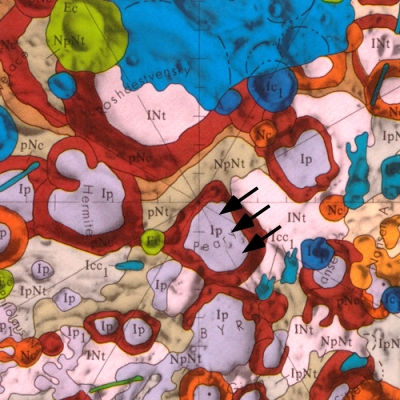 Figure 1. Detail of the geologic map of the lunar north pole [Lucchitta, 1978]. Peary crater is located near the center of the image. Black arrows mark the portion of the crater floor illuminated in the full LROC frame. Download the full geologic map here.
The mottled texture visible in the regolith is relatively common on the Moon, especially in the lunar highlands. Known also as "elephant-skin" texture, it was first identified by lunar scientists analyzing Apollo-era photography during the 1970s. The geologic explanation for this globally-found texture at the present time remains ill-defined; one of the goals of the LROC science investigation is to shed additional light on the formation of this unique texture.