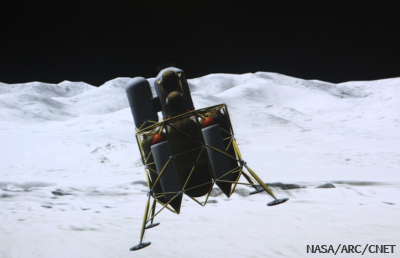 If this doesn't get the conspiracy theorists talking, I don't know what will. NASA is currently undergoing simulations of what it will be like for astronauts to return to the moon. This is not to say that they are taking Moon landing footage to be used later to fake a Moon landing (although, I fear that it will be taken that way). Instead, NASA is using a Vertical Motion Simulator (VMS) to test how the new class of lunar lander will behave when landing on the Moon's surface. And I must say, it does look pretty realistic at times.

These kinds of tests are important as they allow NASA to begin testing technology and training astronauts earlier on in the project's development. And it will also save money in the long run.

Looking almost like a video game, astronauts have the ability to control a simulated landing craft as it moves through the 10 story building where the VMS is held. The data that is collected will allow NASA to make refinements to the landing craft design as well as anticipate any potential problems. Above all though, it is simply quite an impressive technological achievement.
Posted by Joel Raupe at 1:42 AM