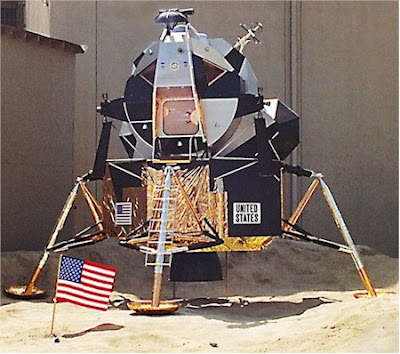 A number of the personal blogs quickly picked up on a posting on GIZMODO.com, early Dec. 5, reporting that a full-scale model of an Apollo lunar module had gone on sale online and could be had for $89,000. This piqued our interest considerably, remembering having seen such a model some time ago. Unfortunately, it was unclear whether it was a one-of-a-kind yarn ornament or made-to-order. (It was hard, but not impossible, to picture row on row of such models, perhaps in or near the aircraft graveyards of the Southwest. Our graphics arts department is already fleshing that vision out. This is one way conspiracy theories get started.)

Each of these echo postings seemed maddeningly accompanied by the same picture of what was almost certainly the RTG deployment early during the first EVA of Apollo 12, forty years ago last month. Fortunately, we found the image we were looking for, and sense they may be related somehow. In December 2008 an enterprising fellow in Maryland had already built such a scale model (pictured here) and was busy, he claimed at the time, seeking investors in hope of robotically placing a "working" scale model of the LM on the Moon in time for the 40th Anniversary of Apollo 11, last July.

Sadly, that idea may have fallen through.
Posted by Joel Raupe at 7:25 PM