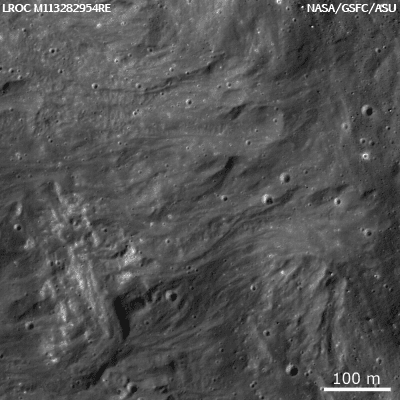 Frozen impact melt flows on the ejecta blanket of the young impact crater Giordano Bruno (22 km diameter). The image is about 600 m across and the flows are about 50-100 m wide (NASA/GSFC/Arizona State University).

In many cases LROC has seen frozen flows of impact melt inside and on the flanks of Copernican aged craters. Giordano Bruno is one of the youngest large craters (22 km diameter) on the Moon. How old is "youngest"? Written accounts of twelfth century eyewitness reports of a bright flash on the Moon may record the event that formed Giordano Bruno crater. That idea was proposed after the first high resolution pictures of the crater were analyzed from the Apollo era of lunar exploration. Scientists could see that the crater was very young and was in the area of the Moon corresponding to the bright flash, so it seemed possible that the flash and crater were related. More recently a team of scientists analyzing high resolution images acquired by the Japanese lunar orbiter Kaguya estimated that the crater formed more than one million years ago. Very young by lunar standards, but certainly not consistent with the eyewitness reports. The Kaguya team (see below) determined the age by counting the number of craters that formed on the Giordano Bruno subsequent to its formation. Were some of the small impacts discovered on the crater actually formed as late stage ejecta rained down on the crater? If so the age may be younger than the current estimate.

The very high resolution images being returned by LROC are revealing impact crater features in exquisite detail. The deposits shown above are actually small distributary flows that emanated from a larger mass of impact melt that was thrown out onto the northwest rim by the impact. Although formed by a different process, impact melts flow in much the same way as lava flows, forming lobes and exhibiting channels and levees. Like lava flows, they cease to move when their source is depleted or the melt cools and freezes into solid rock. Impact melt is formed by the heat and pressure of the impact process. This particular area is at 36.34°N, 102.45°E. The scene is about 600 m across; image resolution is 0.6 m/pixel.

Hopefully, soon the true age of Giordano Bruno can be determined by radiometric age dating of impact melt rocks returned by future astronauts. In the meantime scroll around in the full image and see if you can determine how the small impact craters formed on this fascinating young crater. 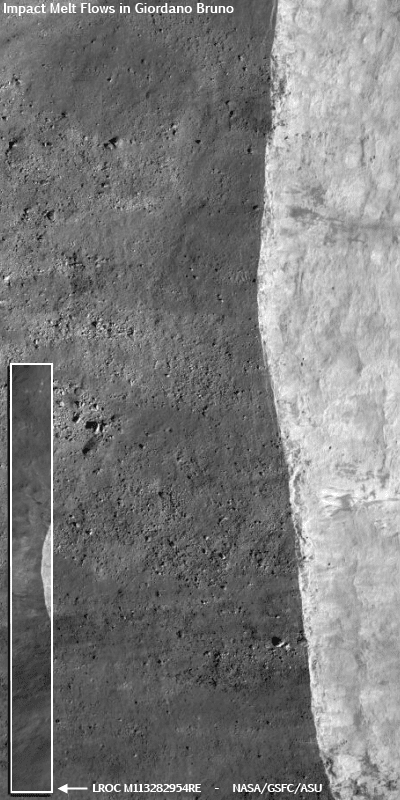 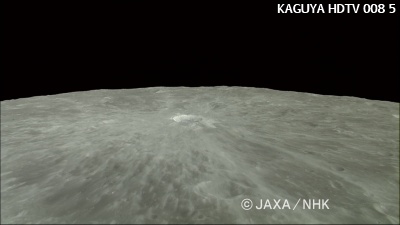 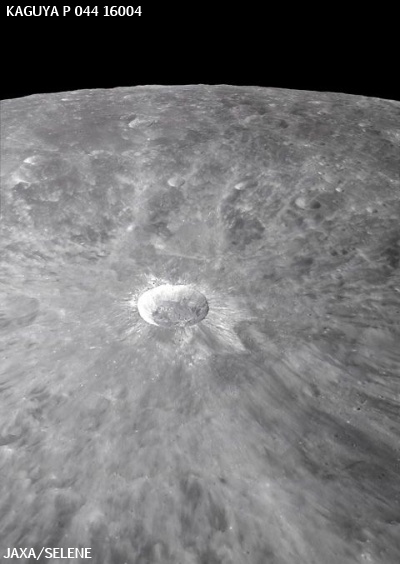