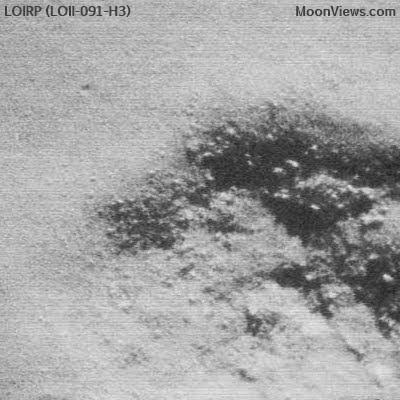 Seeing Boulders on the Moon - Though it might appear to be a LRO Narrow Angle Camera image taken no more than a day or two ago, the photograph above is more than forty years old. It was taken by Lunar Orbiter II and it shows detail of the southwestern Mare Tranquillitatis, close to the future landing site of Apollo 11. Like its sophisticated descendant LRO, Lunar Orbiter II was orbiting around 53 kilometers overhead. An incredible camera system photographed the scene, developed the film chemically and then scanned and transmitted a facsimile of the results back to Earth. Near NASA Ames Research Center in California the Lunar Orbiter Image Restoration Project (LOIRP) continues to recreate a whole new mission from the Orbiter Series tapes, setting up an astounding baseline for eventual comparison with results gathered by LRO [LOIRP/NASA/JPL].

Keith's note: "Tonight we are testing out our newest Mac computer at the Lunar Orbiter Image Recovery Project located at NASA ARC. We'll be using this machine (8 processors and 10 TB of storage) to do near-real time processing of imagery once we have pulled it off of original Lunar Orbiter analog data tapes using our restored FR-900 tape drives. We hope to do a live webcast this coming Thursday so that you can look over our shoulders as we bring another image to light for the first time in more than 40 years."

Read the Post HERE.
Posted by Joel Raupe at 8:08 AM