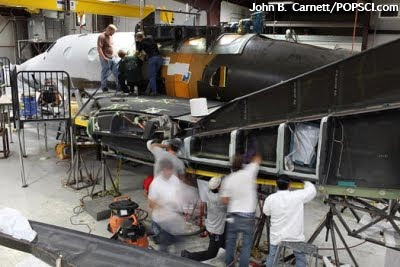 SpaceShipTwo - still being roughed out last September. Though tricked-out for a suborbital ballistic flight it would have been worthy of Admiral Alan Shepard (offering more than all the experience the first American in Space enjoyed in 1961 before commanding Apollo 14 a decade later). It is to be the world's first commercial spacecraft. Roll out for public unveiling is scheduled this coming week at Mojave.
Sam Howe Verhovek
POPSCI.com

For a traveler heading up the highway toward the Mojave Air and Space Port, in the desert 70 miles north of Los Angeles, the surroundings are ghostly. Silent 747s and DC-10 jumbo jets from defunct airlines, along with smaller 727s and DC-9s, some cut up or resting on pylons, are visible from miles away, looking frozen and forlorn. Parked along the road at the airport entrance is a 1962 Convair 990, which began its life as an American Airlines jet airliner. Now the wind whistles through its nacelles and birds nest in its wheel wells.

Mojave is a boneyard, a place where commercial airliners go to die. Yet on the day I visited last October, there was life in the wide blue sky overhead, and it was more striking than the sight of even the most modern airliner. I saw a kind of flying catamaran streaking from west to east. As it came into view, it looked like two business jets flying in formation and high-fiving each other. Closer, I saw twin fuselages joined by large, slightly tilted overhead wings, each with two quiet jet engines on the far side. I was watching the VMS Eve, the airborne launching pad for the smaller rocket ships that in the next few years, Virgin Galactic says, will begin taking paying passengers to space.

Read the Feature HERE.
Posted by Joel Raupe at 12:20 AM