Lunar morphology in the Lake of Death 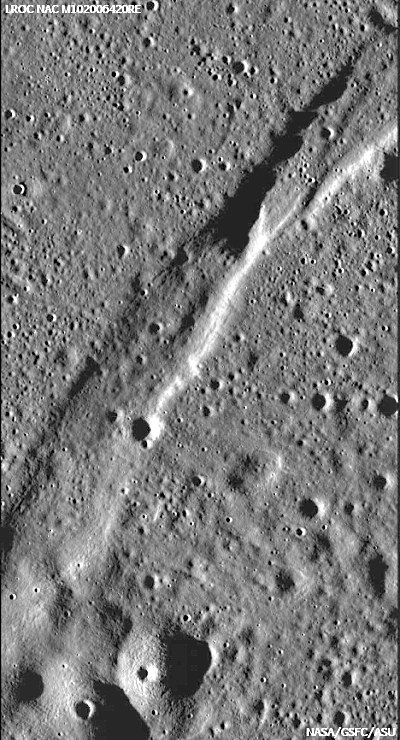 Close up on southwestern Lacus Mortis and a 700 meter wide section of 104 km-long graben Rimae Burg near where it translates from the mare-filled "lake" into the highlands beyond its shore. The narrow angle camera on-board LRO swept up this familiar Near Side telescopic target early in the commissioning phase of its mission during orbit 211, July 12, 2009 - [native res 1.6 m - NASA/GSFC/Arizona State University].
Mark Robinson
LROC News System

"Graben are extensional tectonic features in which a crustal block was down dropped between a pair of faults ("normal faults") when rock is pulled apart (tension). Normal-fault surfaces usually dip about 60 degrees, so the original fault scarp would have been steep as well. Over time, micrometeorite bombardment of the lunar surface results in a gardening of the regolith and the steep slopes become eroded to what is observed here. How does crust "pull-apart"? On the Earth, geologists often see pull-apart features in regions where plate motions are in opposite directions resulting in tension - a zone of parallel faults occurs and grabens form. Lunar scientists have found no evidence of plate tectonics on the Moon--the Moon is a one-plate planet. Tension zones on the Moon are usually found on the outer margins of mare basalt deposits. The mare have a relatively high density, weighing down the crust. As the crust sags beneath the mare, rocks in the central portions are put under compression, sometimes resulting in wrinkle ridges, and rocks at the margins are pulled apart resulting in grabens. The story is sometimes more complicated in areas where there are multiple large deposits. This particular graben, Rima Burg, cuts Lacus Mortis (Lake of Death) and extends into the adjacent highlands. Inspecting a lunar map shows that the local stresses in the crust may come from Frigoris or Serenitatis. Alsograben may follow pre-existing deep fractures in the crust from the formation of large basins. One of the many tasks for future lunar explorers is to inspect tectonic features and work out the complicated tectonic history of the Moon.

"Browse the whole NAC image and examine this graben for yourself." 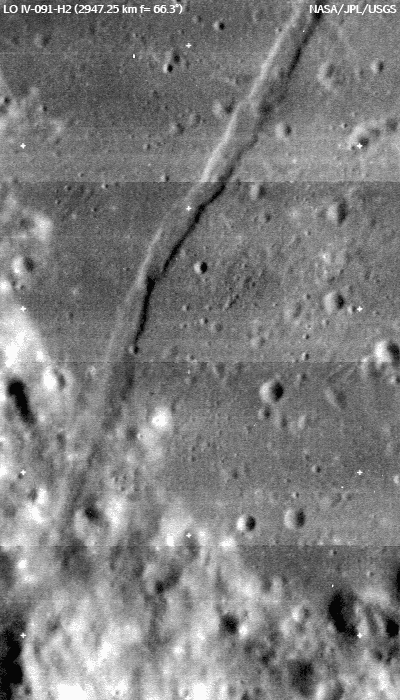 Context (above and below) for this latest release from the LROC team at Arizona State University provided by Lunar Orbiter IV. 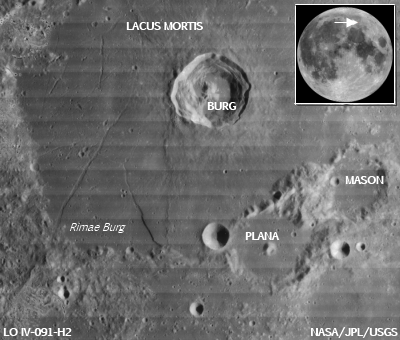