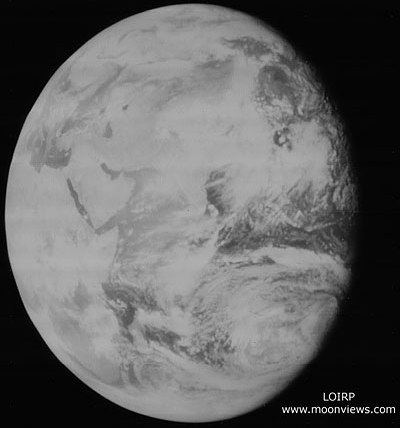 This image of Earth was taken on 8 August 1967 at 09:05:11 GMT by the Lunar Orbiter V spacecraft in orbit around the Moon at an altitude of 5,872.85 km. This image has been described as being the first image ever taken of a "full Earth" from space.
See the Full Context HERE.
Posted by Joel Raupe at 3:33 AM

Thank you for posting that incredible and historic photo, and for this enjoyable site. It's always a pleasure to stop by and dream here.

Why, thank you Brenda. That's a boost to my Reason For Being I can appreciate, this morning. Perhaps a pristine dream, or two, is what often motivates the Group. You may be a poet, you know it?

Two things, appropriate or not, come to mind out of our mutual reservoir of Deep Thoughts, filled to the brim.

"We are such stuff as dreams are made on; and our little life is rounded with a sleep." Shakespeare, "The Tempest, Act IV, Scene 1.

And, naturally, this little poem by Langston Hughes, which serves as LP's unofficial motto (too long, for such status, it would become official if the idea could be expressed in fewer words. Would it sound better, I wonder, in a different language?)