Reporters, not in trance, given closer look at Constellation's Lunar Rover before Inauguration Parade 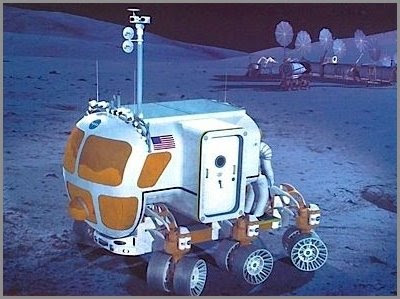 It didn't draw much of a crowd, not as much as the Guest of Honor certainly, at the festivities in Washington, January 20, for President Obama. CNN went to commercial when it finally came into view as they were covering the Inaugural Parade, where the crew of STS-118 made up the rear, coming up dead last. But for those reporters who heeded the call, and those lucky enough to have chosen the particular Starbucks behind it's sidewalk station in downtown N.W. Washington City, NASA entertained those interested in taking a look at the Lunar Electric Rover.

There was plenty of ink ahead of its appearance, and a little after, but engadget got pictures, inside and out, though the context, curbside in DC, made it about as impressive as a Chevy S-10, which was really an injustice. Or like some kind of street fair or museum exhibit, of future glory or possibly a forgotten vision of something that never got off the ground. Yes, "we can" decide the level of irony in this sideshow, from the beginning of the new administration and new president who has apparently not bothered to decide who will run NASA after Michael Griffin.

The burden of proof is on those who inexplicably believe the new administration heralds a new Age of Reason. NASA and Commercial Space exploration has, as a matter of history, had no better friend than the former president. Space Exploration as national policy has had its friends in the White House, famously Democrat John Kennedy, of course, and both before and after the Kennedy Administration, Lyndon Johnson.

Republican Richard Nixon and a Democrat-controlled Congress in 1971 grounded Apollos 18, 19 & 20, of course. No one planned the Gap that, aside from Apollo-Soyuz and the impromptu though admittedly useful Skylab missions, put all America's Space Eggs into the single Space Shuttle basket that was supposed to get off the ground in 1976. Columbia would launch with John Young at the helm in April 1981.

For more on NASA's Lunar Electric Rover, visit HERE.
Posted by Joel Raupe at 2:29 AM