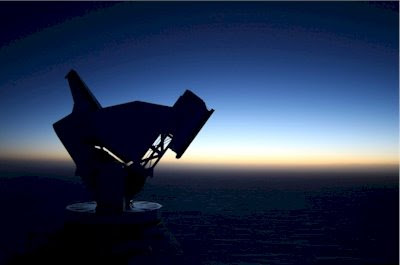 The 10-meter South Pole Telescope with the faintest remaining glow of the sun that had set several weeks earlier. The telescope is located at Amundsen-Scott South Pole Station, Antarctica. Amundsen-Scott South Pole Station is one of three U.S. research stations on the Antarctic continent. All of the stations are operated by the National Science Foundation's U.S. Antarctic Program (USAP). Further information about USAP is available Here. To learn more about the South Pole Telescope, visit the facility's Web site. (Date of Image: April 2008) Credit: Keith Vanderlinde, National Science Foundation.
Everyone and their dog, with a website, is reporting the large mottled disk rising in the east Saturday evening will be the largest full moon of 2009, another perigee Full Moon, some fourteen percent larger than average because it is occurring almost simultaneous to our Moon's orbital perigee, or 50,000 miles closer than its mean distance. A look out the window and at calsky.com, etc., all rightly indicate a cloud shrouded apparition of the Near Side locally, so you might suppose I'll be missing out.

Not a chance. I've enjoyed haunting blue Moon-lit skies the past two nights, watching the Sunrise over the Marius Hills to the best libration-driven angles of deep south Malapert long enough to wear out sixteen AA batteries powering one telescope's drive. Those of you with a favorable view of tonight's Full Moon, which rises here in about two hours and will reach absolute Full over North America in 0.29 days (and will be up far longer than the Sun will be here in the Northern Hemisphere, more than 14 hours) congratulations.

But it is the times when the Near Side's features are in relief that their secrets are bestowed, and the next few evenings after tonight's spectacle promise to be clear once again, and you can bet I'll be tracing out the shadowed relief as the sun sets once again, begining with Crisium and the eastern limb.

In the meantime, rather than show a picture of a familiar Full Moon, courtesy of the National Science Foundation, above is a picture of the 10-Meter South Pole Telescope at Amundsen-Scott South Pole Station, Antarctica - as far South as anyone on Earth can be, last April and "the faintest remaining glow of the sun that had set several weeks earlier."