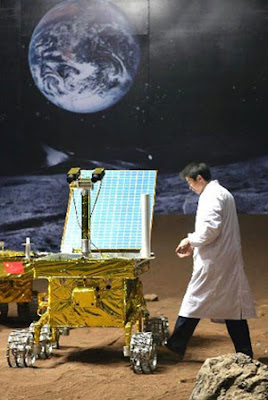 Ed. Note: Jeff Foust of the essential Space Review, has skillfully disputed this story as a leap taken from unrelated facts, and then repeated, as it has been, all over the Net in the past few days. The incoming Obama Administration has been asking questions about EELVs and NASA's relationship with the Air Force, etc., but has not, as Bloomberg implies, set policy to this remarkable extent. Yet.

The first American in space was a Navy aviator flying on an Army Redstone medium range ballistic missile. The first American to orbit Earth was a Marine Corp aviator flying on an Air Force ICBM, but the first American to walk on the Moon was a civilian, his achievement combined glory for a U.S. Agency organized to put the most peaceful face possible on the Cold War battlefield for the high ground of space.
Aside from their payloads the only purely civilian manned-rated booster prior to the Space Shuttle was the legendary Saturn V. Mercury and Gemini orbiters flew on Atlas and Titan rockets, respectively, and their descendants are still carrying vehicles into space to this day. Almost the same combination of rocket designs, with the familiar names of Atlas and Centaur, that sent Surveyors and Lunar Orbiters to the Moon in 1967 are scheduled to send the Lunar Reconnaissance Orbiter to the Moon in 2009. The mighty Saturn is history.
Now Bloomberg reports the Obama Administration will probably tear down long-standing barriers between the U.S.’s civilian and military space programs to speed up a mission to the moon amid the prospect of a new space race with China.
Obama’s transition team is considering a collaboration between the Defense Department and the National Aeronautics and Space Administration because military rockets may be cheaper and ready sooner than the space agency’s planned launch vehicle, which isn’t slated to fly until 2015, according to people who’ve discussed the idea with the Obama team.
The potential change comes as Pentagon concerns are rising over China’s space ambitions because of what is perceived as an eventual threat to U.S. defense satellites, the lofty battlefield eyes of the military.
Read more HERE.
Posted by Joel Raupe at 5:04 AM

THANK YOU FOR YOUR BLOG DEAR