The First Eye on the Moon 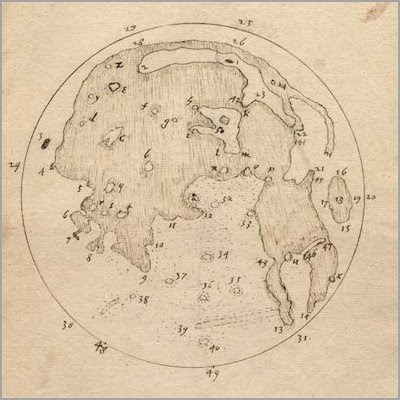 Composite lunar drawing by English
astronomer Thomas Harriot, 1612 or 1613.
Technology hurried from theory to practice, allowing a color television camera to finally, faithfully show a live broadcast of Alan Shepard and Edgar Mitchell complete the moonwalks of Apollo 14 in 1971 is today in the hands of most cellphone users. It is taken for granted, enough to have become a neglected extra feature. The Charged-Coupled Device (CCD) just isn't as celebrated as the light bulb, for example, or the telescope. But there was a time when amateur astronomers couldn't apply photographic techniques and computer-guided clock-drives to take photographs of the Moon superior to that of the largest institutionally-owned telescopes of the World.
Just 400 years ago the telescope, as a concept employed to view the sky, was recorded for the first time. Like so many other things lost in the mists of time, what we call the telescope today was part of the vast accumulated technology of China, and was brought to Europe during the late Era of Exploration and Imperialism by the Dutch. The positioning of lens to refract and magnify a distant and small segment of the distant line of sight was likely to have been stumbled upon countless times in countless ways over the centuries.
Who was it, then, who first trained two lens fixed perpendicular along the line of sight between the human eye and the Moon, foe example?
This International Year of Astronomy 2009 has been set to remember Galileo Galilei, the long-celebrated favorite of Pope Urban VIII and credited with "inventing the telescope in 1609. History is often lost, or distorted, in translation, as misconceptions go on to be repeated long enough to eventually become "fact." Galileo is clearly worthy of celebration, but hardly for being the first astronomer or as the inventor of the telescope.
Astronomy may, in fact, have been first distinguished from astrology by Abraham, who 1st Century historian Josephus described as having coming out from "Ur of the Chaldees" after strong disagreement with fellow members of the astrological priesthood of Sumer (modern day Iraq), early in the 2nd Millennium B.C. (4000 years ago).
And according to today's Guardian Science Blog posting "Did an Englishman beat Galileo to the first moon observation," more than the politics of Galileo is being celebrated during this IYA2009.
"Thomas Harriot, a wealthy but publicity-shy astronomer and mapmaker, produced a series of exquisite lunar drawings, one of which is dated 26 July 1609, pre-dating Galileo's much-celebrated observations of the moon by six months."
"A composite drawing of the moon dating to 1612 or 1613 is considered by some experts to mark the birth of modern cartography. The lunar drawings by Harriot will form part of an exhibition at West Sussex Record Office in Chichester in July to mark the International Year of Astronomy."
Read more HERE.
Posted by Joel Raupe at 6:31 PM