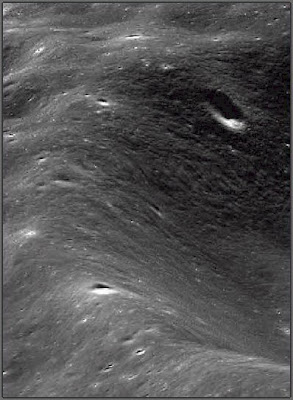 Veteran Selenologist and author Charles A. Wood (LPOD, elsewhere) has once again been first out of the gate announcing availability of the very latest public images from India's Lunar Orbiter Chandrayaan 1.

In recent days rumors circulated the Indian Space Research Organisation (ISRO) was prepared to release thousands of frames obtained from Chandrayaan's 35kg Moon Impact Probe (MIP) released not long after the landmark lunar orbiter arrived at the Moon, taken before the subsatellite impacted near the Lunar South Pole in mid-November.

Still being studied to definitively identify features in large scale, that rumored set of images is now expected to be released closer to the end of January. The above image is a small subset of a detailed 2D image of Far Side crater Coulomb B shown in full HERE and discussed in Wood's LPOD entry for January 5.