"Snow Storm" Revived to "save NASA?" 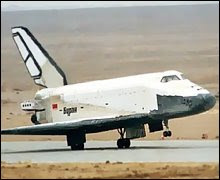 Buran rescued from the children's park, the One Orbit Wonder, returns, to fill the Gap left by the retirement of the Space Shuttle?

So says Russia Today. One of the Soviet's mini-shuttle test pilots goes on the claim the vessel was built to salvage the remains of Skylab, though the dates don't exactly add up.
Two decades ago the Soviet space shuttle Buran blasted off on its first and only orbital flight. Just a few years later, with the collapse of the Soviet Union, the programme was shelved.

The Buran was the Soviet Union's answer to NASA’s space shuttle programme. On November 15, 1988, the shuttle was propelled out of the Earth’s atmosphere by the specially designed Energia booster rocket from the Baikonur launch pad in Kazakhstan.

Pavel Sharov from Cosmonauts News Magazine explains the advantages the Soviets had over their rivals in the U.S.

“The USSR surpassed the Americans in technology - U.S. shuttles can only be landed by humans, while the Buran lands automatically,” Sharov said.

Magomet Talboev was one of the pilots who test-flew the shuttle without going into orbit. He said the Soviet authorities had high hopes for the multi-billion dollar spacecraft.

“The Energia-Buran programme was started to get the capability to attack the United States, just like the shuttle was able to attack the USSR. We also wanted to take the Skylab space station from orbit. Buran was supposed to put it in its cargo bay and deliver it back to Earth for studies,” Tolboev said.

But the project was scrapped before these plans could be fulfilled. They sank aalong with the Soviet regime. The Energia-Buran became one of the Soviet Union's last super-projects. Billions of dollars were invested and more than a 1.5 million people worked to design and build it. Nevertheless, the Buran went into orbit only once before the collapse of the Soviet Union.

The rest of the story HERE.
Posted by Joel Raupe at 2:54 AM