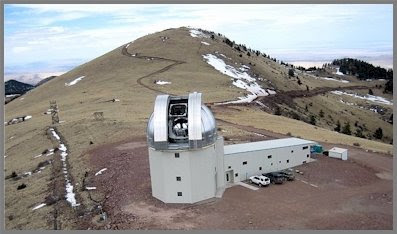 Hoping to observe a brief but hopefully distinctive plume of superheated formally fossilized water lifted up by a ton of spacecraft hitting the inside of a permanently shadowed lunar crater at 1700 meters per second is bringing together a lot of people.

Eileen Ryan, science director at New Mexico Tech's Magdalena Ridge Observatory, says she feels like "one of the big boys."

Tech's 2.4 meter optical telescope is the smallest of 11 officially funded facilities that will monitor the Lunar Crater Observation and Sensing Satellite (LCROSS) 1 ton impactor scheduled to accompany the Lunar Reconnaissance Orbiter (LRO) on the same booster into polar orbit of the Moon as soon as April.

The Socorro, New Mexico college received $30,000 to collect, analyze and interpret data from the planned impact of LCROSS. A small army of amateur and semi-amateur astronomers are actively preparing to watch the polar regions of the Moon from locations 400,000 kilometers away. The impact of the LCROSS impactor is designed to repeat, by orders of magnitude, the highly speculative final impact of the productive Lunar Prospector mission, in a permanently shadowed crater near the South Pole of the Moon in 1999.

The time and place of impact will be set to take advantage of the Moon's maximum libration, when the Moon's polar regions are alternatively turned for more favorable observation.

Not far from Socorro, the Apache Point Observatory (site of the APOLLO lunar laser ranging program) will also monitor the impact, as will other observatories around the world; five in Hawaii, one in Arizona and three in Earth orbit.

From lunar orbit, LCROSS itself will monitor it's own final moments of descent and from overhead the impact will be observed by the LRO orbiter as it begins its far longer mission.