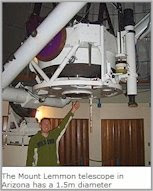 The discovery of six comets made 2008 a truly stellar year for Italian astronomer Andrea Boattini.

He spends solitary nights keeping vigil on the heavens at Mount Lemmon Observatory in Arizona - looking for cosmic debris hurtling through the inner Solar System.

Two telescopes in Arizona and one in Australia are conducting the Catalina Sky Survey - part of a Nasa project to find and track near-Earth objects (NEOs).

Six comets in one year is the most found by an Italian astronomer since the mid-19th Century, even if it is not a world record.

Asteroids are far more common in the Solar System and potentially more hazardous to Earth. Mostly they are rockier, smaller and less spectacular than comets, so usually they are harder to find. There is a vast belt of asteroids between Mars and Jupiter.

In 1998, Nasa started compiling an inventory of NEOs larger than one kilometre (0.62 miles) in diameter.

Don Yeomans, head of the NEO programme at the Jet Propulsion Laboratory (JPL) in Pasadena, California, says his team has found 763 asteroids and 82 comets in that category. That is 81% of the estimated total of near-Earth asteroids wider than 1km.

"It's getting much more predictable. Before 1998 we hadn't found many and didn't do much follow-up," he told BBC News.
Read more HERE.
Posted by Joel Raupe at 12:33 AM