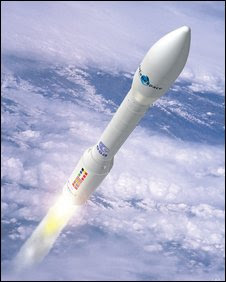 Europe will launch two flagship space telescopes this year, and three satellites that will acquire key data about ice, gravity and soils on Earth.

European Space Agency boss Jean-Jacques Dordain set out his priorities for 2009 at a Paris briefing on Wednesday.

He said 2008's successes, which saw the Columbus science lab attached to the space station, were "exceptional".

"Last year was really an outstanding vintage," he added. "But there'll be no breathing space going forward."

Esa activity this year will witness the recruitment of new astronauts and the start of Soyuz launches from the European spaceport at Kourou in French Guiana.

The Soyuz initiative has required considerable investment at Kourou, to construct facilities that are a facsimile of those at the Russian rocket's traditional home of Baikonur, Kazakhstan.

IMAGE BBC NEWS: If all goes according to plan,
2009 will see the maiden launch of VEGA
Read more HERE.
Soyuz: The Russian rocket will start launching from Europe's Kourou spaceport. Because rockets launched close to the equator get a favourable "kick" from the Earth's rotation, Soyuz at Kourou will have increased capacity. In 2010, Soyuz will start launching operational Galileo satellites.
Vega: This is Europe's newest rocket. It is currently scheduled to make its maiden flight from Kourou in December. Vega will be used for smaller payloads that have struggled recently to find an available launcher. Vega is part of Europe's policy of having "guaranteed access" to space. 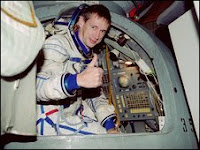 Frank De Winne: The Belgian astronaut will become the first European commander of the International Space Station. He will launch to the orbiting platform on a Soyuz in May. His tour of duty will last roughly six months. He will have a five-person crew under his charge.
Posted by Joel Raupe at 3:47 AM