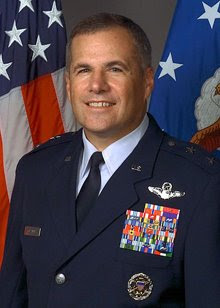 Gration is a retired major general of the United States Air Force and currently works as a foreign-policy advisor to Obama. While the ex-fighter pilot has little experience running space programs, he has a strong background in military aerospace and has held many important policy positions. He also spent a year in the early 80s working as a White House Fellow for NASA's deputy administrator at the time, Hans Mark. (Read his biography here.)

Gration, who beat out scientists and former astronauts for the position, has a tough job ahead (of course, pending his confirmation hearings before the Senate Committee on Commerce, Science & Transportation.) NASA's very future is hanging in the balance-- budget woes and uncertainties over the shuttle program and planetary exploration are urgent priorities.
First on his plate will be deciding whether to retire the shuttles in 2010 or extend their life a few years, and whether to continue developing the Ares rockets, a new fleet of space-shuttle derived rockets intended for travel to the International Space Station (ISS) and eventually lift the Orion spacecraft to the moon.
Read more HERE.
Posted by Joel Raupe at 6:43 AM