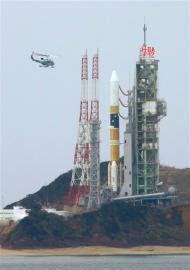 Japan got its first commercial order to launch a satellite on a homegrown rocket on Monday, a deal that Japanese officials hope will grow into a business that could support the country's cash-strapped space program.

The agreement — which targets a liftoff date after April 2011 — comes less than two weeks before Japan plans to launch eight satellites into space to show that its H2A rocket can compete with rivals in Russia, the United States and Asia's new space powerhouse, China.

(Not to mention ISRO's Polar Launcher)

Japan's space program has long been focused entirely on lifting government-sponsored, unmanned payloads — mainly scientific, telecommunications and spy satellites, which it first launched 10 years ago — off the launch pad.

But officials are hoping that commercial use would help fund Japan's long-term space development, which Tokyo believes is an essential part of national security.