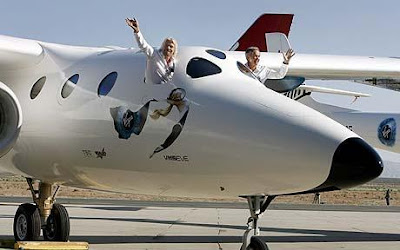 Flight International has reported that WhiteKnightTwo, the mother ship, ran into trouble when making a series of ariel manouveurs.

WhiteKnightTwo is being used to carry SpaceShipTwo, the rocket which will take passengers into space.

The journal cited an unnamed source as providing the information about the supposed difficulties during the test flight at the Mohave Desert in California.

It claimed that Peter Siebold, the test pilot, was unable to keep the aircraft on the runway.

But this was denied by Will Whitehorn, Virgin Galactic's president.

"There are no issues we know of at all at this stage which will affect the programme or the overall design. It is beyond ridiculous," he said. "There is no problem with the flight."

"It was a highly successful test flight and everything is going to plan.," said Mr Whitehorn...
Read more HERE.
Posted by Joel Raupe at 4:50 PM