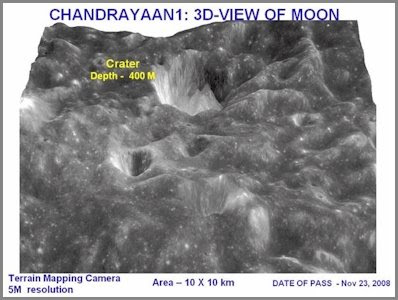 Latest Release of 5m/p Res image from Terrain Mapping
Camera on-board Chandrayaan is not identified as to
location and very unrealistic. Still, its little better than
nothing. ISRO, CNSA and JAXA could learn a few hard-
earned lessons from NASA on public relations.

Following literally months of near-silence from JAXA (and NHK), after what had been monthly mere dribbles of data, usually year old HDTV stills and the occassional Terrain Camera spectaculars from lunar orbiter Kaguya, things seemed to change, at least for a while, when India's Chandrayaan arrived nearby. Suddenly, a reportedly damaged Kaguya Image Gallery was revamped, though most of the experiments still pointed only to more than year-old "first light" results from several of Kaguya's on-board experiments.
At least JAXA's return to its regular dribble was accompanied with identifying information, and the results, not least among them the TC virtual fly-overs of Tycho, Taurus-Littrow and the Alpine Valley, were stunning.
Now Chuck Wood, through LPOD, has used the latest incomprehensible image releases from ISRO's Chandrayaan as an excellent illustration of the same frustration we expressed last year.
"This problem is not limited to India," Chuck writes. "China has stopped issuing press releases about the success of its Chang'e lunar orbiter, and ESA had a confused and limited release of data from the SMART-1 mission that ended more than two years ago. Apparently, it is easier to build a spacecraft than it is to know what to do with it."
Naturally, he summed up the situation better than we did, though I can't help but mention two things he left out.
All the experimenters have papers and results, embargoed of course, awaiting release at up-coming conferences, and we've been patient. Nevertheless, the comparison between the daily release on the web of even the most trivial raw images from Cassini and the MROs by their domestic handlers with the public relations habits of ISRO, JAXA and especially CNSA are striking.
The United Nations Outer Space Treaty binds its signatory nations to timely release of data from robotic sensing. Then, soon after the appearance of another selection of information related to the subjects of coming conference papers in the years ahead, much of it will be locked behind expensive firewalls, the world's scientists having learned the joys of capitalism only too well.
Because Chuck Wood has set the case before us so well, especially the habit the justifiably proud ISRO of releasing images without any identifying coordinates, we'll just recommend you read what he had to say for yourselves. We've ranted about this before, here and in direct Email, and the ambiguity of being both grateful and complaining is too much of strain on our fellowship at the moment.
Read Chuck Wood's take on all this HERE.
Posted by Joel Raupe at 2:57 PM