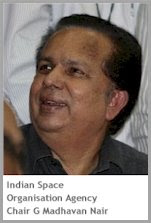 "India is now a major force in world in the space sector with the launch of Chandrayaan-I," he said at the 15th convocation ceremony of the Pandit Ravishankar Shukla University here. "Now ISRO has planned a manned moon mission by 2015."

The noted scientist was on a day's visit to Raipur.

While speaking at a function organised by the Chhattisgarh Info-tech and Bio-tech Promotion Society (CHIPS) here, Nair said: "ISRO projects are not only aimed at getting details of moon or space but to assist governments to design programmes of rural development through ISRO's space technologies mainly in field of agriculture and land development."
And a different take from Pakistani sources

M. Annadurai, the project director of Chandrayaan-I on Sunday said that the ISRO proposed to undertake the country’’s first manned moon mission by 2020 following the success of Chandrayaan-I.

The Chandrayaan-II mission is expected to be undertaken within a couple of years followed by Chandrayaan-III, Annadurai revealed.

He informed that the Chandrayaan-I mission is sending considerable amount of data and scientists are busy analysing it.

Several countries have approached India to set up a common lunar research centre for conducting various studies, the director added. (ANI).
Posted by Joel Raupe at 1:27 AM