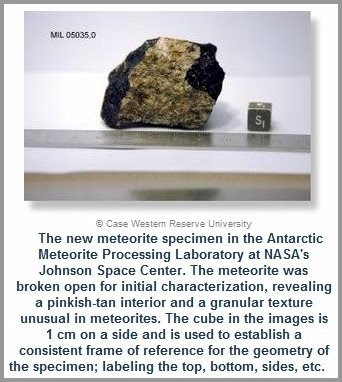 Although last year's inclement weather resulted in fewer Antarctic meteorite recoveries than usual, scientists have recently discovered that one of the specimens is a rare breed -- a type of lunar meteorite seen only once before.

The new specimen was found by a field party from the U.S. Antarctic Search for Meteorites program (ANSMET) headquartered at Case Western Reserve University. The meteorite was discovered on Dec. 11, 2005, on an icefield in the Miller Range of the Transantarctic Mountains, roughly 750 km from the South Pole.

This 142.2 g black rock, slightly larger than a golfball and officially designated MIL 05035, was one of 238 meteorites collected by ANSMET during the 2005-2006 austral summer. Heavy snows limited search efforts during much of the remainder of the six-week field season, making this meteorite, discovered just 600 m from camp, a particularly welcome find.

Scientists involved in classification of Antarctic finds at NASA's Johnson Space Center and the Smithsonian Institution's National Museum of Natural History said the mineralogy and texture of the meteorite are unusual. The new specimen is a very coarse-grained gabbro, similar in bulk composition to the basaltic lavas that fill the lunar maria, but its very large crystals suggest slow cooling deep within the Moon's crust. In addition, the plagioclase feldspar has been completely converted to glass, or maskelynite, by extreme shock (presumably impact events). The new specimen most closely resembles another Antarctic meteorite, Asuka 881757, one of the oldest known lunar basalt samples.

Like the other lunar meteorites, MIL 05035 is a piece of the Moon that can be studied in detail in the laboratory, providing new specimens from a part of the lunar surface not sampled by the US Apollo program. Many researchers believe that Apollo visited some of the most unusual and geochemically anomalous regions of the Moon, and lunar meteorites, knocked off the surface of the Moon by random impacts, give us samples that are more representative of the Moon as a whole. The highly-shocked nature of MIL 05035 suggests an old age and may provide new constraints on the early intense bombardment of the Earth-Moon system, improving our understanding of the history of the Earth's nearest neighbor and aiding NASA's efforts toward a return to the Moon.

Following the existing protocols of the U.S. Antarctic meteorite program, scientists from around the world will be invited to request samples of the new specimen for their own detailed research. Details concerning initial characterization of the specimen and sample availability are available through the Antarctic Meteorite Newsletter, available on the Web and mailed to researchers worldwide.

Discovery of this meteorite occurred during the fourth full field season of a cooperative effort by the National Science Foundation (NSF) and the National Aeronautics and Space Administration (NASA) to enhance recovery of rare meteorite types in Antarctica, in the hopes new martian samples would be found.