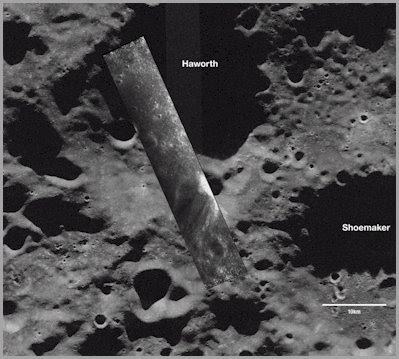 From Charles Wood, and his indispensable LPOD, "One of the biggest scientific puzzles today is whether ice exists in the permanently shadowed craters at the lunar poles. The Chandrayaan-1 lunar orbiter and the forthcoming Lunar Reconnaissance Orbiter both carry a small radar (Mini RF) that will beam pulses of energy into these dark craters to image their floors and make measurements of their physical characteristics. The first results of this radar imaging have just been released, showing a swath over the south polar crater Haworth. The NASA release says the swath is 50 by 18 km, but the scale bar indicates 42 by 7 km. The release is also titled NASA Radar Provides First Look Inside Moon’s Shadowed Craters but the Kaguya ultra-sensitive Terrain Camera successfully imaged the forever-dark floor of Shackleton crater last year. The Mini-RF doesn't reveal anything unusual about the floor of Haworth - it has a number of small impact craters that will permit an estimate of its age. If they give an old age (a few billion years) their relatively sharp edges argue against slow accumulated of ice from comet impacts. And each place where a crater occurs would evaporate and deplete any ice that might have existed. The radar has also determined that the interior of a small, dark-shrouded crater near Shakleton has a real hard surface, different than other surfaces pinged so far; perhaps consistent with ice. These radar images were collected in November; presumably many more are now available - formal interpretation is promised for January 29."

Kochi - In what could be a very significant scientific breakthrough, Indian and global space agencies onboard Chandrayaan are waiting with bated breath for a final confirmation of the presence of ice at the lunar poles.

This week India will move Chandrayaan to take a second and closer look into the depths of a small crater on the south pole to confirm the presence of ice after the initial inference of data suggested a strong possibility of this.

Sources told to The New Indian Express that Chandrayaan payloads detected the presence of ‘real hard surface’ inside a small crater sitting next to the Shackleton Crater. Payloads of ISRO and NASA have recorded this unique feature.

But it is too early to conclude that it may be a sheet of ice, sources said. “Such hard surface is very uncharacteristic of the lunar surface. The moon’s upper crust is very dusty. Though the dust percentage would be proportionately reduced inside the crater, the possibility of such a hard crust is food for thought,” they said.

The suspected presence of ice was first detected by an S-band radar that can look into dark abysses where sunlight doesn’t reach. The S-band rays reflect from targets and onboard computers analyse the feedback.

“A couple of instruments on Chandrayaan have given the same inference.

The satellite will be made to focus on the crater once again. This is to verify the first input. The data will be calibrated and cross-checked with input received from other payloads,” sources said.

The presence of ice will give a tremendous boost to global efforts to use the moon as a prospective transit point for inter-planetary missions and future habitat. Apart from iron, the Chandrayaan has detected the presence of magnesium on the lunar surface. But concrete information regarding the presence of Helium-3, the much-sought-after gas considered to be a potential source of power generation, is yet to be recorded.

“There is so much data pouring in every day. This needs to be analysed and translated into scientific information,” sources said. The ISRO is planning a total review of the Chandrayaan data in the third week of this month.

Sources said all partner agencies would take part in the first review meet scheduled for January 29 when a formal announcement of materials detected till date is expected to be made.
Posted by Joel Raupe at 5:32 AM