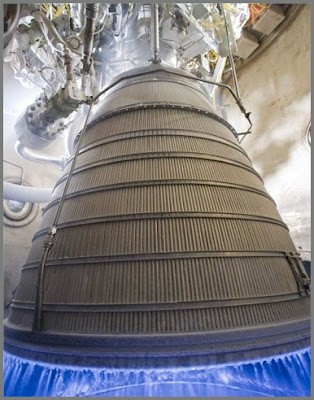 NASA's new Common Extensible Cryogenic Engine for the lunar lander gets icicles
on its rim while burning at 5,000 degrees Fahrenheit.

The CECE—developed by Pratt & Whitney Rocketdyne and NASA—is fueled by liquid oxygen and liquid hydrogen. All the engine components are super-cooled, so when vapor comes out of the burning of the oxygen and the hydrogen and touches the rim of the cryogenic engine, it transforms into ice instantly.
West Palm - Pratt & Whitney Rocketdyne’s Common Extensible Cryogenic Engine (CECE) has successfully demonstrated critical capabilities required for NASA’s Altair lunar lander. The engine performed with stable operation at the widest throttle range of any known high performance cryogenic engine in December during its third series of ground tests at the company’s West Palm Beach, Fla., test facility. Pratt & Whitney Rocketdyne is a United Technologies Corp. (NYSE:UTX) company.
While accumulating nearly 3,000 seconds of operation during 11 hot fire tests, the CECE achieved a throttling range from 104 percent down to 8 percent of its maximum power of 13,800 pounds of thrust. The engine is fueled by a mixture of liquid oxygen and liquid hydrogen. It is validating propulsion technologies to support NASA’s Constellation Program.
Read more HERE &
at Universe Today
Video of a 'very cool' hot engine
Posted by Joel Raupe at 1:58 AM