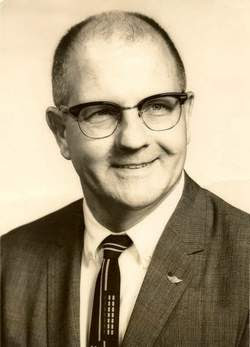 Don Hervig, 98 who helped the United States reach the moon as a senior engineer during the Apollo Era has passed away in Bradenton, Florida, where he and his wife retired in 1988.

Chief of calibration at the Army Missile Defense in Huntsville during the 1960's and early '70s, he helped Man-Rate the Saturn V designed by Wernher Von Braun at Marshall Space Flight Center. Before retiring in 1974 Hervig also witnessed the last launch of the super-booster as it carried the 100-ton Skylab Space Station into orbit.

Hervig, who died of natural causes January 14, was "very humbled," his family said, to have had a role in the historic missions. Autographed photos of several astronauts were a perk of his 33-years of civil service, interrupted by World War II when he served as a radioman in the U.S. Army.

Born December 30, 1910 in Fairmont, MN, Hervig was a champion diver in his youth and competed for Northwestern University where he studied civil and electrical engineering. He showcased his diving skills at the 1933 Chicago Worlds Fair and later helped coach Springboard Diver Miller Anderson who later went on to win the Silver in the 1948 Olympics in London and the 1952 Summer Games in Helsinki.