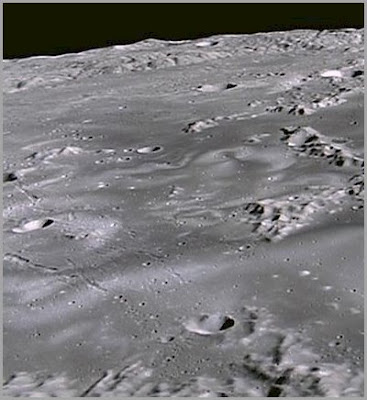 The elegant swirl field on the Far Side of the Moon, at Mare
Ingenii, unseen until 1959, like all lunar swirl patterns
is accompanied by local magnetic fields. The Ingenii
patterns and associated magnetism are directly
on the opposite side of the Moon
from the Mare Imbrium Impact Basin.
Image - JAXA Kaguya HDTV - 2007

A claim issued by the press office at the Massachusetts Insitutute for Technology that "Astronomers" had solved "a long-standing lunar mystery" are short-sighted, or, at the very least, represent poor journalism. David Chandler of MIT's press office issued the press release Thursday Afternoon. Like Charles A. Wood's comments on LPOD, yesterday evening, regarding the long-recognized first lunar observations of England's Thomas Harriott recorded months before those of Galileo Galilei, it may be this story too will get wide circulation while without really being "News."

It has long been known the Moon no longer has a global magnetic field, its interior dynamism, unlike that of Earth, is considered dead.

Nevertheless, it has also long been known magnetic fields recorded at or near the surface of the Moon exist and are associated with well-documented surface "swirl" patterns.

For more than a decade it has been known also that three, perhaps more, of these local "lunar magnetic anomalies" are sufficiently strong to "stand-off" the steady stream of protons that make up the Solar Wind. Some appear to have developed "mini-magnetospheres," field cavitation such as Earth.

It has been suggested the lunar regolith is kept more reflective through some interaction of these magnetic fields with particle bombardment preventing "space weathering," the dark "reddening" aging caused mostly by Solar Wind and perhaps building up into distinctive "shadows" that look very much like the patterns seen when iron filings are sprinkled around a bar magnet, though such a similarity is superficial.

Many, not all, of these apparenly fossilized magnetic anomalies exist on the Far Side of the Moon and were first photographed by the Luna 2 in 1959, and which predominate at points directly opposite the well-known lunar basins visible to the naked eye from Earth and suggesting a common origin.

Mystery still abounds concerning the age and origin of lunar swirls, some of which are not immediately associated with basin-forming impacts, like the long pattern north of the equator in the Sea of Storms (Oceanus Procellarum) labled "Reiner Gamma," the bar formation near Airy Crater and the Descartes Formation, all of which are on the Moon's Near Side.

John Young and Charles Duke, who landed near the Descartes Formation during Apollo 16 in 1972 recorded the strongest magnetic field at their landing site than any of the Apollo missions. At the time, the distinctive Descartes "albedo" was thought to be volcanic in origin, but Apollo 16 samples showed the rocks on the "Stone Mountain" portion of that plateau, visited by the astronauts, were of a higher-than-average magnetism but were composed of anorthosite believed common throughout the Highlands of the Moon's Near Side and nearly throughout the Far Side.

In 2003 magnetometer data analysed by Lon H. Hood of the University of Arizona and others, collected during the Lunar Prospector mission of 1998-99, showed an intense magnetic field centered on the north rim of Descartes Crater, 60 kilometers from Apollo 16's southern most science station, on the bluffs of Stone Mountain overlooking South Ray Crater

The Descartes Formation, a brighter coloration of the surface directly under an intense local magnetic field, was afterward classified as an amorphous, but distinct, albedo swirl.

The same also was confirmed recently at nearby Airy Crater, where the more common bright double striping pattern, with a darker band between, was also associated with a local magnetic anomaly.

While the MIT announcement may confirmed already well-documented magnetic properties within samples collected at the Taurus-Littrow by Dr. Harrison Schmitt of Apollo 17, and may be an analysis strongly hinting at what was, at one time, a truly global magnetic field, the existance of global paleo-magnetism does not, as the press release says, rule out shock-fossilization or several other possible origins for local magnetism and, later, the distinctive swirl patterns found in hundred of locations all over the Moon, usually at places antipodal to basin forming impacts.

The strongest magnetic field yet confirmed at any location on the Moon is associated with the most well-known of the swirl formations, on the Moon's Near Side, at Reiner Gamma, a lengthy bright swirl that appears to have originated under the Marius Hills no earlier than around 3 billion years ago. The Reiner Gamma formation, like other Near Side swirls, does not appear to be opposite the Moon from any basin forming impact.

This has contributed to still others theories of the origin of swirl albedo and strong lunar magnetic anomalies. Some scientists make strong claims that the Moon's relatively higher albedo swirl patterns simply could not have lasted as long as the length of time associated with either an underground flow of molten iron baring material, as appears near the surface at Reiner Gamma, or at other points, including those which are clearly antipodal to the Basin Forming Impacts, which took place between 3 and 4 billion years ago.

Studies of space weathering on the Moon and on similarly composed "airless bodies," like the asteroid Vesta and its family in the inner solar system, seems to point to a longevity of regolith against space weathering (at least from micro-meterorites and Galactic Cosmic Rays) at no more than 900 million years at the outside.

As a result, some have proposed a much more recent origin for lunar albedo swirls and their attendant local magnetic fields. Some have proposed their origin from a recent interaction, at or near the surface, by swarms of highly magnetic mini-comets, torn asunder by tidal forces, within the mere 20 million years needed for micro-meteorites, etc. and other impacts to rework the entire near surface of the Moon, as recently as 2 million years ago, in some studies.

Last October this writer proposed a possible on-going process might be at work, between existing shock-fossilized magnetism or volcanism and the dusty migrating lunar exosphere, or a dynamic surface interaction of an apparent "daily" migration of solar charged sub-micron- sized dust as the exosphere cycles around the Moon with the sunrise terminator.

This hypothesis, which is undergoing unpublished study, may account for an net "out-migration" of newly-created dust, keeping the surface below local magnetic field line "fresh" by afteward preventing a corresponding fallout of material after the polarity of charge-levitated lunar dust is reversed during the long lunar night.

Nevertheless, MIT's apparent reconfirmation that there once existed a global lunar magnetic field is a strong hint that the early Moon may once have been a "Magma Ocean," not long after its formation estimated at 4.575 billion years ago.

Since that time, however, the Moon's surface has undergone many changes, including billions of primary and secondary impacts and not a little volcanism, both large and small, as witnessed by the filling and refilling of the mare material in the familiar and not so familiar lunar basins.

The MIT work does, if reports are correct, confirm (once again) that a paleo-magnetic field, fueled by a global magnetic dynamism, must have once existed. It does not, however, "rule out" other processes, some of which, like the charging of sub-micron lunar dust particles and the still poorly understood complexity of the levitation-motivated migration of dusty materials all over the Moon, might still be underway.