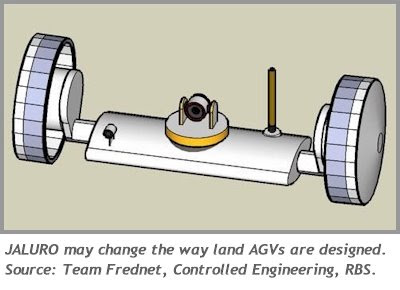 In a departure from conventional planetary rover design strategies, Team Frednet is developing a 2-wheel robotic rover that may help lower weight and cost of future automated guided vehicles (AGVs). Named Just Another Lunar Robot (JALURO), the prototype is one of two designs the team is developing to compete for the Google Lunar X-Prize.

Team Frednet comprises three key systems, software, and hardware developers who serve as the leaders and overall coordinators of an international group of open source developers, engineers, and scientists. The team says its goal (besides winning the Google Lunar X Prize), is to bring the same successful approach used in developing major software systems (such as the Internet, and Linux) to bear on the problems associated with space exploration and research. In so doing, they plan to establish an Open Space Foundation that provides incentives, education, and funding to future individuals and organizations seeking opportunities in this final frontier.

“We hope to foster greater public interest in space exploration and research,” says team organizer and leader Fred J. Bourgeois, III, “as well as educate the public at large on the past, present, and future importance of these discoveries, while simultaneously (through our open-source initiative) giving individual contributors the opportunity to have a very real impact on the world around us all.”