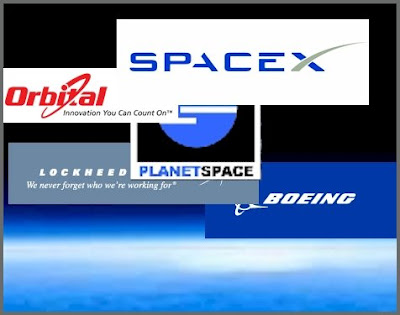 On Christmas Eve-Eve, NASA finally announced the results of its long-running Commercial Resupply Services competition, and as the tidbit above correctly points out, neither Lockheed nor Boeing (nor Alliant Techsystems (NYSE: ATK), for that matter) wound up in the winners circle. What you may not know, is that none of these three companies were actually bidding for the contract at all, at least not directly.

Instead, these three giants of the aerospace industry chose to hitch their carts to a foal of a company named PlanetSpace, which acted as the prime contractor in the bid. Turns out, NASA was not amused -- nor impressed.

Instead of awarding its $3.5 billion in cosmic-milk-run contracts to "Big Space" in the person of little PlanetSpace, NASA went with trusted workhorses this time:

Now, Reuters may consider these two firms "start-ups", but the fact is that unlike PlanetSpace, both have already been vetted by NASA, and found superior. In the recent Commercial Orbital Transportation Services (COTS) contest, for example, Motley Fool Rule Breakers recommendation Orbital (25 years old, and so hardly a start-up) received $171 million worth of funding. Meanwhile, SpaceX got off to a running start with a $278 million contract of its own. (Not bad for a start-up, eh?)

For further Motley reading on the final frontier:
Posted by Joel Raupe at 4:53 PM