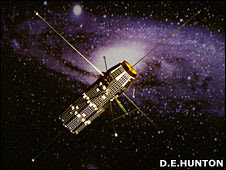 At AGU meeting, Air Force satellite data reveals upper Ionosphere layer lower than expected. Relation to Solar Minimum likely.
Currently, the ionosphere - a layer of charged particles that envelopes the planet - is at an altitude of about 420km, some 200km lower than expected.
The C/NOFS (Communication/Navigation Outage Forecasting System) was launched back in April and put into an elliptical equatorial orbit at altitudes between 400 and 860km to investigate this enigmatic layer.
Its sensors record the density and temperature of the plasma, as well as the strength and direction of electric and magnetic fields within it.
One of C/NOFS' first discoveries has been simply to identify where precisely in the sky the ionosphere is right now; and it is a lot lower than expected.
During the night it has been detected at about 420km, rising to 800km during the day. Scientists here at the American Geophysical Union meeting said more typical values would be 640km during night-time and about 960km during the day.
To some extent, this should not be too surprising. The ionosphere reacts to the Sun's 11-year cycle of activity and our star is currently in a very quiet phase.
More from BBC Science HERE.
Posted by Joel Raupe at 2:31 AM