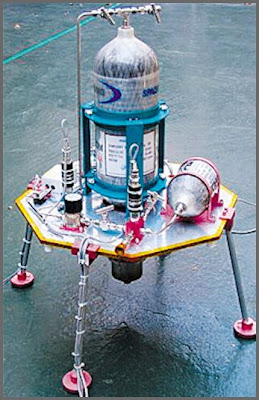 3 Pub Alley Moments, a UK blogger, is, at first glance, an apparently unlikely source pointing to the English version of Korea's Digital Chosunilbo story on an independent and successful effort to construct a prototype unmanned lunar lander.
Kwon Se-jin, a professor of aerospace engineering at KAIST, on Thursday said the team, in collaboration with Space Solution, have developed and tested a module that can travel to the moon from the earth's orbit and land on the moon's surface with its own engine propulsion.
The lunar module can be carried on a rocket into the earth's orbit and propel itself on into lunar orbit from there with its own engine several times. It measures 40 cm by 40 cm and consists of a propulsion engine and a control system. It can land on the moon's surface using its four legs. The engine also reduces the speed for the moon landing.
The concept puts the cost of a lunar lander mission using the basic design way below that of 1998's Lunar Prospector orbiter. The data gathered by that mission may have doubled our knowledge of the Moon, and it's data is still being stretched for more discoveries.
Not much for payload, even below the International Lunar Network's proposed 40 kilogram ceiling, but it may be an outstanding achievement anyway. It shows how technology has advanced in the four decades since Surveyor (1966-1968), especially in miniaturization and in the milling of materials, like valves and tanks. Smarter, lighters, stronger. Most of the cost appears to be locked into booster, TLI and cruise.
Competitors for the Google Lunar X-Prize take note!
Posted by Joel Raupe at 5:53 AM