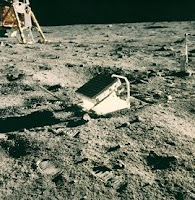 They are the only instruments on the Moon left during the Apollo Era still adding daily to our knowledge of the Moon's motion and distance, the data from which are also millimeters away from determining the answer to important questions of Cosmology.
The Lunar Laser Range Reflectors were deployed first by Apollo 11 in 1969. By the end of that year, a pencil thin laser beam from MacDonald Observatory in West Texas widened to a half-mile in width in the second and a half it took to reach the Sea of Tranquillity reflecting back in photons counted in numbers of just a few per hour. Still, it was enough to measure the distance to the Moon to within three inches, still a impressive number.

Still counting the time for entangled photons to be reflected back to Earth from LLRR panels left by Apollo 11, 14 and 15 (the last being the largest and most readily detected) the passive reflectors have remained undisturbed, while lasers, optics, materials and detectors have continue to grow. Cosmology, in the meantime, has also taken investigators places undreamed of in the Apollo Era.
In recent years, from the APOLLO station on Apache Point, second and third generation lasers have tightened down that figure to 3 millimeters. Using the same instruments deployed at three Apollo landing sites forty years ago, theory holds answers to mysteries posed by dark matter and dark energy may be answered if the distance to the Moon at any given moment can be squeezed down to within a millimeter. That goal is close to being achieved.
Using the LLRR data, Science Daily reports "Two researchers from the universities of Valladolid and Alicante are developing a mathematical formula to study the rotation of the moon, taking into account its structure, which comprises a solid external layer and a fluid internal core."
"Juan J. A. Getino, from the Applied Mathematics Department of the University of Valladolid, and Alberto Escapa, from the Applied Mathematics Department of the Higher Polytechnic School of the University of Alicante, suggest in their work that the Earth and the moon should be considered as “multi-layered” systems. In order to analyse their movements, the researchers have used Hamiltonian mechanics, a kind of classical mechanics used, among other things, to study the movements of heavenly bodies in response to gravitational effects."
Read More HERE.
Posted by Joel Raupe at 12:26 PM