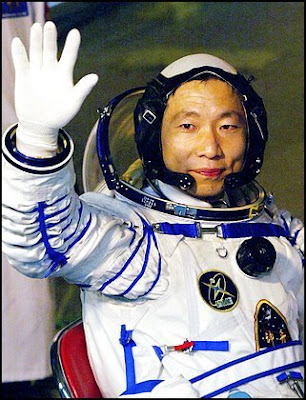 China's First Taikonaut Yang Liwei
WASHINGTON (Reuters) - The aerospace industry is urging the United States to rev up a 21st century space race that could otherwise see a Chinese astronaut beating America back to the moon -- last visited by U.S. Apollo explorers in 1972.
Becoming a laggard in space exploration simply because of economic woes would sacrifice technology opportunities and the ability to inspire future generations, said Marion Blakey, chief executive of the Aerospace Industries Association.
China and India have made important strides in space in recent months, triggering talk of a new space race.
"It has been a long time since we've had anyone breathing down our necks. Now we do," Blakey told the Reuters Aerospace and Defense Summit in Washington.
"The idea that the next boots on the moon are probably going to be Chinese is something that the public has not realized," said Blakey, who represents most of the companies that propelled 5 Apollo missions to the moon's surface some four decades ago.
Twelve U.S. astronauts have walked on the moon. The last human footprints were left by Eugene Cernan in 1972.
India launched its first unmanned moon mission in October.
That came on the heels of China's first space walk which grabbed international attention in September.
The 1960s space race that led to the successful Apollo moonshots was fueled by the Cold War.
The Aerospace Industries Association is campaigning for continued funding for defense and other aerospace sectors despite the economic slowdown, saying aerospace supports more than two million well-paid jobs in all 50 U.S. states.
But executives acknowledge the industry is bracing for a leaner period after several years of strong spending.
"I do not believe the American people will trade off the importance of exploring what clearly is the next frontier in the middle of short-term economic duress," Blakey said.
In January 2004, President George W. Bush announced a new plan for the United States to return to the moon as early as 2015 and no later than 2020, and use it as a stepping stone to deeper voyages into space including a future trip to Mars.
Europe last month agreed on a boost in space spending. But its $13 billion budget smaller that NASA of the United States at around $17.3 billion in 2008.
(For summit blog: summitnotebook.reuters.com/)
Posted by Joel Raupe at 2:33 AM