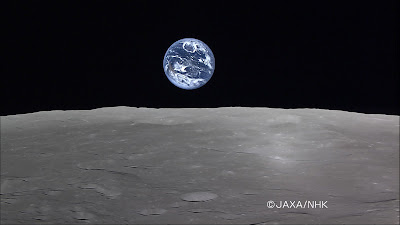 With the appointment of Susumu Kasaki as the new Kaguya Lunar Orbiter Project Director, Japan announced two weeks ago their plans for de-orbiting Kaguya, mapping the ghostly lunar crustal magnetic anomalies from its last lower altitude passes over the entire Moon next year.

Now, after what seemed an interminably long wait, JAXA has redesigned its Flash Kaguya Image Gallery, going live in English on Christmas Day.

New Kaguya Image Gallery
At first glance any renewed attentions played by JAXA to the Kaguya public gallery is excellent news. Those who have gone so far as to extrapolate image names stored on "less than public" Internet servers, and downloaded all that was available from more than one website on the Home Islands may now have the most complete Kaguya collections available.

The images posted to this newest official JAXA site, however, are not anywhere close to being the more comprehensive "complete" collection of Kaguya images and videos that were formally available. Using the new site's search function, for example, areas on the Moon that were once announced by JAXA as their standards for instrument calibration in the years prior to the beginning of the Kaguya mission are just unavailable. It is not credible to believe that JAXA has not taken, by now, HDTV images of the entire Moon, of magnetometer measurements, etc. The improved release of a second improved topographical map of the entire Moon from laser altimetry is a delightful hint of what Japan has yet to make public. As delightful as that may be, however, any perfecting improvements the more detailed information that could be made to the large scale relief maps painstakenly maintained by the USGS in Flagstaff would be welcome.

NASA's Lunar Reconnaissance Orbiter has better not be holding out for international DVD sales, as Japan appears to be. If so, JAXA should release that collection soon because LRO will eventually be launched, and its a superior spacecraft with a more powerful camera. As tentative as the hold may still be on a twenty year or so advantage in space technology on the part of the U.S., that advantage still remains dominant, at least for now.

But with LRO will the United States be also as apparently determined to ignore the spirit, if not the exact letter, of the Outer Space Treaty of 1967, as is China, Japan and India?

In Japan, the distractions may be a dropping of the ball on the part of their private "copyright" partner NHK, the national television network.

In India, it may be no shortage of public relations partners with access to raw data from Changdrayaan but perhaps a lack in the ability on the part of their press and to make heads or tails of floods of new data, in the context of what is already known about the Moon.

Tails of proprietary information being hidden, regarding the locations of precious minerals and resources for example, makes little sense, and if true, such efforts are misguided. The promise of Helium-3 in fueling post-2050 world-wide economic growth is clear but some decades away. No part of the Moon can hide itself exclusively from any of the nations analysing the surface from orbit. Lower orbit, as will be the case soon for Kaguya, will reveal more diversity, beyond the imaginations of those who mistakenly dismissed the Moon as essentially worthless after the Apollo Era.

More likely each of these newly energized national space authorities are making the same mistake NASA once made, one hopefully unnecessary in the Internet age.

NASA set the standards for openness originally as a contrast with the secretive Soviet Bloc, with very public launches of manned vehicles from the U.S. in very experimental, complex spacecraft, during the Cold War. That sharing of information with the public was widespread but sparcer than many Americans can imagine in the present time. Data prepared for the level of public interest was prepared for the lowest common denominator among the taxpayers.

Photography from the Apollo missions appeared in brief, poorly printed highlights and in only slightly better collections printed often six months after each of those lunar missions in National Geographic and Life.

Often little provision is made for those, many of them students and scholars,with far more knowledge of these remarkable achievements, but possessing less "context" or "real interest" than the straight-arrow engineers and scientists.

Ironically, today the continuing restoration and digitization of that forty year old data and photographs is underway blowing off the dust from data collected during the Apollo landings, and are now seemingly more vivid and immediate (and to a far larger segment of the world's population. The channels of information, the media connecting NASA and the public, were far more narrow and few, being printed or televised before the practical use of digital video technology made possible by Apollo's innovative engineers.

Further, today "amateur" astronomers are better able to create using unimagined consumer computer power, the kinds of full mosaic photographs of the Moon than were professionals working at university observatories a half-century ago.

JAXA's Kaguya Selene lunar orbiter has been engaged in some serious surface investigation, recently, even as plans to eventually deorbit in 2009 were announced December 15. Before decommissioning Kaguya with her twin attendant gravity and relay subsatellites are to be brought down into a much closer orbit, as was Lunar Prospector before being intentionally impacted into the depths of a dark Lunar South Pole crater in a final but apparently fruitless effort to expose detectable water-borne ejecta. NASA's combined launch of a MRO-class HiRES camera and impactor, the LRO and LCROSS as early as late April, will add to the unfinished business exposed by the invaluable Lunar Prospector. Even without a camera, LP's data are still unveiling new information about the Moon, a decade after its obliteration.

LRO and LCROSS will soon join China, Japan and India (Chang'e 1, Kaguya (Selene) and Chandrayaan 1, respectively) in a new and almost fevered demonstration of sudden renewed interest in the Moon and her more obviously undiscovered secrets that began in earnest with the NASA/DOD sensor platform Clementine in 1994.

Much has been made in comparing the sharing of raw images by NASA JPL and partners from Mars, Mars orbit and from the vicinity of Saturn, against what can only be called a secretive, glacially slow clear reluctance to share similar data from the Moon by China and Japan, and now perhaps India as well. Unintentionally, the agencies are neglecting one of their greatest links to the grass roots support of the nominally interested general public: The Very Interested minority who constitute their greatest weapon in securing public will and public funding.

Indian's Chandrayaan science team has begun it weeks-old lunar survey by releasing an impressive assortment of images and video, and are now slowly backing away to devote more resources to gathering data they believe the general public is not capable of appreciating the breathtaking and entertaining images that are barely better in quality than the photography delivered by NASA and the Soviet Union four decades ago.

Of course, it's hard to get those ultimate close-ups without actually landing or, better still, engaging in ultimate Geology field trips experienced so far only by Senator Harrison Schmitt ithirty-six years ago this month.

China's Chang'e, first in the growing fleet of Lunar Orbiters presently examining the Moon, was quick to deliver an impressive brief examply of photography after arrival in lunar orbit in 2007, but afterward was followed by more than a year of near silence, aside from reports of the solar powered probe's survival after drops in available voltage during two lunar eclipses.

Finally, in November, China proudly took the wrappings off of a Full Moon mosaic slightly different and, in someways, slightly better and also slightly poorer than lunar albedo mosaics collected by Clementine. Since then, more silence from the world's most populated nation, with more hints , like India, of the shape of lunar missions to come.

After arriving in lunar orbit soon after Chang'e, Japan's Kaguya delivered a flood of the first high definition television videos and stills, along with mere tastes of the data collected from all but two of its instruments. From late 2007 until last spring JAXA could be counted on to deliver up spectacular new results at least once a month.

Among a few of the results delivered by JAXA were the best images of Far Side features in better contextural detail than when human eyes surveyed the Moon directly from orbit.

During the summer, however, aside from an occassional image sifted from earlier data and posted (usually two weeks after posting them first to the Japanese language version of Kaguya's Flash Gallery. Then new postings to the English website dribbled until the latter was permanently "disabled," intentionally or as a result of some "accident," the detail of which have remained cloudy.

Those of us who depend upon Charles Wood and friends, or our own regular visits to the Japanese language Kaguya Image Gallery were increasingly being disappointed.

While professional scholars and observers, not to mention the hundreds of thousands of others patiently wait for NASA's Lunar Reconnaissance Orbiter (unlikely to be in position to use the same HiRES camera over the Moon before late summer) high hopes are fueled the United States will deliver images and preliminary details almost instantly, raw or otherwise.

Any camera able to spot the tracks, shadows and detail of Spirit and Opportunity as they continue to roam through the Martian countryside much further below, should be able to unmistakably identify the artifacts of Apollo, Surveyor, Lunokhod, as well as impacts and final resting places of over 67 sites of manned and unmanned missions to the Moon between 1965 and 1976.

Putting to rest for all but the most obdurate skeptic's ridiculous conspiracy theories about the accomplished engineering demonstrated by the U.S. and U.S.S.R. would be a great service and a demonstration of NASA's commitment to transparency, and it would further NASA's well-earned reputation for showing the taxpayers results of very Open Source science.

The latest "new" announcements of the "discovery" of Iron, Thorium and Uranium on the Moon can be humored with a self-confidence NASA retains from having mapped the abundance of these elements and others, as well as reserves of volatiles like Hydrogen. Openness will be celebrated next March when the NASA-chartered Lunar and Planetary Science Institute holds its 40th annual conference, open to the hard-work shown in thousands of abstracts, Posters, and lectures prepared by both professionals and laymen "lunatics."

The space programs of the world should learn NASA has not lost out its advantage in space exploration by secrecy, and has won and maintained that advantage by innovation built on necessity. With LRO, let us hope NASA itself hasn't forgotten its strongest boosters.
Posted by Joel Raupe at 7:43 PM