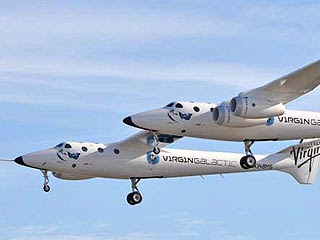 Designed by Scaled Composites, the huge and unique WhiteKnightTwo mothership rolled down the runway and muscled itself into the air using four Pratt and Whitney PW308A turbofan engines. The WhiteKnightTwo flew for about an hour, departing the runway at roughly 8:17 a.m. Pacific Standard Time, safely touching down at the Mojave Air and Space Port at approximately 9:17 a.m. PST.
"It's a big day," said Stuart Witt, general manager of Mojave Air and Space Port. "I think it's a real reflective time. When everybody's looking for a bailout, there are still people that are doing something for a much larger reason," he told SPACE.com.
After a number of shakeout flights, the WhiteKnightTwo is to be outfitted with the now-under-construction SpaceShipTwo. That rocket plane is also being built by Scaled Composites of Mojave, California. Ultimately WhiteKnightTwo is to carry the space plane to altitude, where it will then detach and head for suborbital space flights.
The WhiteKnightTwo/SpaceShipTwo combo is to serve as the backbone of Sir Richard Branson's Virgin Galactic suborbital spaceline operations.
Read more HERE.
Posted by Joel Raupe at 2:44 AM