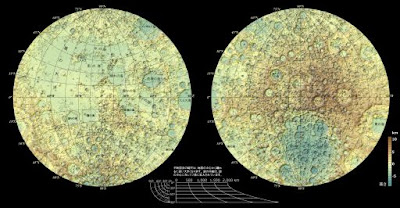 "You went on location and took pretty pictures of what
you saw. That's entertainment. Trouble is Government
thinks it will confuse people"
-Dave Ossman (The Firesign Theater)
Emily Lakdawalla reports from the Planetary Society Blog of an highlighted instrument by instrument status report of the Kaguya Lunar Orbiter.
The highlight of the presentation was presentation of an updated large scale lunar gravity map, a large scale (i.e., small size = "large scale") version of which was posted December 9, to the Japanese language version of the Kaguya Image Gallery. (The English side has apparently been disabled, for more than a month, for cryptic reasons related to "the accident." Reports of server problems at JAXA have reportedly been rectified.)
Most enthusiasts long ago downloaded laser altimeter topography maps, in small scale and in English. A shaded (very much more useful, but just as poorly labled) version is now available for those skilled at locating craters characterized by size of distinctive relief. Even the Japanese labled version is sparcely labled but far superior to the initial versions released in April.
Yesterday we reported on Friday's announcement from Kaguya's new project manager Susumi Sasaki from December 10 that the platform would be deorbited before the summer of 2009.
Prior to this plans call for Kaguya to be brought down to a highland skimming low orbit to continue adding to already considerable datasets from the project and explicitly to add highly anticipated information about the Moon's delicate crustal magnetic anomalies.
Meanwhile, perhaps to compensate for what can only be described as a failed online image gallery, JAXA has uploaded a few of the more famous 4:3 high-definition Kaguya videos to YouTube. Some of the 25 even feature English voice overs.
The Kaguya Image Gallery is a sore spot for those of us impatient for a minimum of regular and predictable updates. The promise offered by the Gallery has never been delivered upon, even in Japanese, and most of the 70 or so of the largest HDTV images have had to be literally hacked off non-public servers belonging to the NHK television. Updates have been lax, when compared to even "raw" images usually made available as soon as possible by NASA JPL Deep Space missions teams, like those collaborations devoted to Cassini and the MRO's.
Far from getting better, the situation has only gotten worse, leading some to wonder if the reason may be the target, our Moon. Forty years ago amateurs would wait sometimes six months for the first National Geographic renditions of the Apollo missions. Those same images can't compare to the High Resolution restoration from original slides to digital gradually making their way to online archives, many of whom seem spectacularly new, as though they were taken earlier today.
Charles A. Wood asked, in an aside on his invaluable (and entertaining) LPOD wrote today concerning the hard work of collating data from many new and historic missions by the US Geological Service, that he was uncertain ESA's SMART-1 even existed. The Chinese have only begun releasing very "small-scale" wall maps of the Moon's albedo, none of which is of much real use in its present form, except perhaps to China. Japan, meanwhile, has been stingy with its data and India started well, but seems to be setting a similar sporadic pattern of image relief.
If NASA tries this with the Lunar Reconnaissance Orbiter, I won't be the only one to raise more than just a "bit of an annoying fuss."
As NASA forgot in the early days, and still forgets too often today, that each of these missions is neglecting the sheer entertainment value that these projects present, too what is, by far, the greatest number of people who pay most of the bill.
Posted by Joel Raupe at 8:38 PM