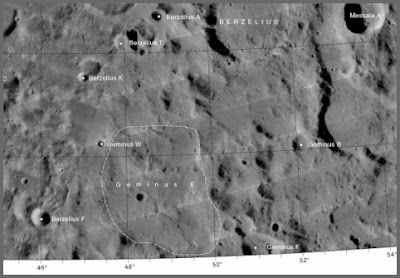 When Charles A. Wood learns about it, the rest of us, who follow his daily LPOD postings, learn about it too. This morning, for December 16, 2008, Chuck took note of the new United States Digital Lunar Orbiter Atlas coming online from Flagstaff, giving credit where credit is due.
Having used the USGS Map-A-Planet server as a study aid to accompany Chuck's excellent book, The Modern Moon: A Personal View, this morning's post is timely. The reconstruction and restoration and, finally, the online digitization of legacy data from the Lunar Orbiter (1966-1968), along with the datasets from Clementine, have proven invaluable.
In Chuck's one-of-a-kind style, the veteran Lunar Scientist and observer also calls for a serious update of recognized lunar nomenclature.
"The fact that the non-crater Geminus E still exists as a name shows that lunar nomenclature needs a modern updating!" Chuck writes. "Perhaps, someday, the much better resolution and uniformity of coverage images from SMART-1 (did that mission really exist?), Kaguya, Chandrayaan-1, Chang'e-1 and LRO will be available to make the first atlas using 21st century data. In the meantime we should thank Jenny for her herculean efforts - she is the Mary Blagg of this century - and her maps are much better!"
Make LPOD a Daily Routine
Posted by Joel Raupe at 5:22 AM