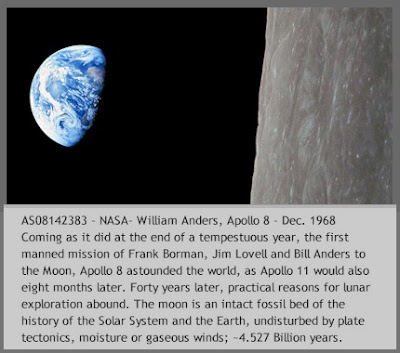 By Lisa Zyga - PHYSORG Not much is known about the Earth before 4 billion years ago, the earliest period in the planet’s 4.5-billion-year history. Because Earth has lost almost all geological records of this era from its surface, it’s often considered our planet’s dark ages
This lack of data on the early Earth is not merely trivial. Without knowing the conditions of early Earth, researchers haven’t been able to answer some fundamental questions of earth science: when the Earth’s magnetic field originated, how the Earth’s relationship with the moon changes over time, and when oxygen first appeared in the atmosphere (and, incidentally, when life originated on Earth).
Recently, a team of researchers consisting of Minoru Ozima and Yayoi N. Miura from the University of Tokyo; Qing-Zhu Yin from the University of California, Davis; and Frank Podosek from Washington University in St. Louis, Missouri, have proposed a series of experiments that could answer these three mysteries, independent of other observations that sometimes give conflicting results. They hope that their proposal might serve as a useful guide for future investigation.
“I speculate that heavy bombardment by meteorite showers at around 4 billion years ago – which is well-recorded on the lunar surface as numerous craters and is known as lunar cataclysm – may also have almost totally erased surface records on the Earth [before 4 billion years ago],” Ozima told PhysOrg.com.
To make up for the lack of early geological evidence on Earth, Ozima and his coauthors suggest that examining the lunar soil for light elements such as helium, nitrogen, oxygen, neon, and argon could shed light on these questions. Previous research has shown that light elements from Earth‘s early atmosphere could be transported into space by the Solar wind and Earth’s wind, and some of these elements should reach the Moon’s near surface. However, such element transportation would be favorable only under certain conditions: namely, if the Earth did not have a permanent geomagnetic field, and if the distance between the Earth and Moon was much shorter than the present distance.
These requirements could be met by the Earth in its very early days. Scientists know that the Earth’s geomagnetic field is caused by the motion of the planet’s liquid iron core (which formed with the Earth around 4.5 billion years ago). However, the sustained geomagnetic field might also require the crystallization of a solid inner core, possibly placing the field’s origins as recently as 3.5 billion years ago, when geologists have evidence of its existence. Other studies have shown that, due to the slow loss of tidal energy, the Moon is drifting further and further from the Earth. Today, scientists estimate that the Moon is twice as far away as it was 4 billion years ago.
Therefore, carefully analyzing the amount and content of light terrestrial elements on the Moon could impose a constraint on the onset time of the Earth’s geomagnetic field. An analysis could reveal information regarding the variation of the Earth-Moon system, such as confirming the increasing day length (estimated at 0.002 seconds per day per century) in order to conserve angular momentum as the Moon drifts farther out. Since the far side of the moon has always faced away from us shortly after the moon’s formation, the research team predicts that almost no terrestrial elements should be observed in lunar soils on the far side.
Ionized oxygen could also escape from the Earth even with the Earth’s geomagnetic field, although the amount would differ. The researchers explained that if oxygen originating from Earth’s atmosphere were identified in the top 50 nanometers of suitable mineral grains collected on the Moon’s surface, augmented by the age of the mineral grains determined by radiometric dating techniques, it could provide unambiguous proof for the rise of oxygen in the Earth’s atmosphere in an early period. Because oxygen in the Earth’s atmosphere is generally attributed to photosynthesis, the first appearance of oxygen is often regarded as synonymous with the origin of life on Earth. On this issue, sulfur isotopic records have shown conflicting results, ranging from 2.5 billion years ago to much earlier for oxygen’s appearance.
Although such experiments would require extremely precise isotopic measurements of tiny concentrations in lunar soils, the researchers said that such investigations are feasible today with minor technical improvements. Ozima said that the most challenging part of carrying out the proposed experiments is organizing a large-scale international laboratory.
“Firstly, we need to collect hundreds of thousands of lunar ilmenite grains from lunar soils, not only from the near side, but also from the far side,” he said. “And then we need tens of thousands of isotopic analyses of high precision of lunar ilmenite grains. Even a well-equipped and stuffed contemporary laboratory would be capable of a few hundred analyses at most.”
The proposed experiments show that, despite the great distance between the Earth and the Moon, our natural satellite could tell us more about our planet than we can find here. As Ozima added, answering these questions on the Earth’s earliest days could help scientists understand the origin of the solar system – “the most fundamental issue not only in Earth and Planetary Science, but also in the intellectual challenge of human beings,” he said.
More information: Ozima, Minoru; Yin, Qing-Zhu; Podosek, Frank A.; and Miura, Yayoi N. “Toward understanding early Earth evolution: Prescription for approach from terrestrial noble gas and light element records in lunar soils.” Proceedings of the National Academy of Sciences, November 18, 2008, vol. 105, no. 46, 17654-17658. Copyright 2008 PhysOrg.com. All rights reserved. This material may not be published, broadcast, rewritten or redistributed in whole or part without the express written permission of PhysOrg.com.
Posted by Joel Raupe at 2:02 PM