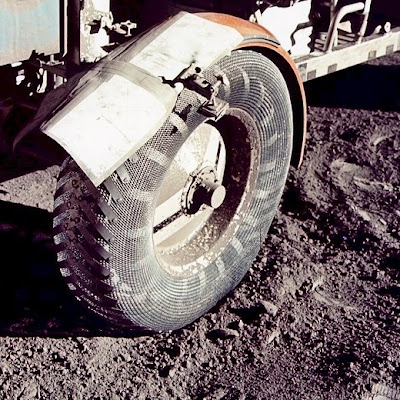 Gene Cernan & Harrison Schmitt rigged up a laminated map with duct tape
and saved themselves from the heavy dusing of Lunar Rover
Rooster Tails after a fender failure during Apollo 17
Goodyear and the NASA Glenn Research Center (GRC) recently completed a jointly-funded project for the development and production of twelve replicates of the original wire-mesh moon tire used on the Apollo Lunar Roving Vehicle in the early 1970s. This was the first step toward understanding this unique non-pneumatic tire technology, and its applications on both the moon and Earth.
Read More HERE.
Posted by Joel Raupe at 4:21 AM